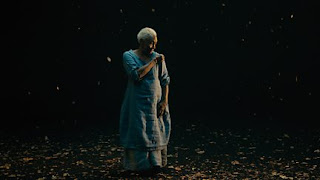 As part of the 65th BFI London Film Festival, the world premiere of Ear For Eye, the second feature from filmmaker and playwright Debbie Tucker Green, will be shown on BBC Two and BBC iPlayer on Saturday 16th October...
Press Release
The film will also be shown at BFI Southbank with the writer/director expected to attend along with key cast members.

Tucker Green has adapted her highly acclaimed 2018 Royal Court stage production for the screen, with backing from BBC Film, BBC Two and the BFI, awarding funds from the National Lottery. It is the second feature film from the BAFTA and Olivier Award-winning writer and director.

From front rooms, kitchens and campuses to the streets, Ear For Eye follows Black families, friends, students and older generations navigating British and American society today. Visually inventive, Ear For Eye explores demonstrations vs direct action, violence vs non-violence, the personal vs structural and features an impressive soundtrack from artists including Run The Jewels, FKA Twigs and Kano.

Writer and director of Ear For Eye, Debbie Tucker Green says: “Ear For Eye has been re-written for film bringing intimate portraits of characters to screen cinematically in a way that only film can. With original music composed by Luke Sutherland and tracks by Sons of Kemet, Run The Jewels, Little Simz, Kano and FKA Twigs the film intertwines beats, dialogue, visuals and music shifting through time and place.”

Tricia Tuttle, BFI London Film Festival Director says: “Debbie’s first feature Second Coming screened in our First Feature Competition in 2014, and it is such a privilege to have her back to World Premiere Ear For Eye, and also to present the premiere in this way with the BBC. Audiences across the UK can see the film on BBC Two while we welcome Debbie and cast to the BFI for the Live Festival screening that evening. Debbie’s writing is so powerful - lyrical, complex, urgent- and this adaptation of her own work is a wonderful blend of theatre, performance and film, brought to life by a truly talented cast.”