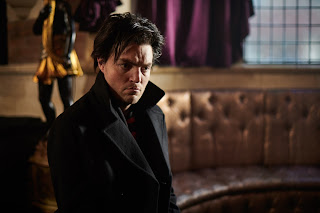 Tom Burke stars in Alan Moore and Mitch Jenkins' film The Show, which premieres at FrightFest tomorrow before a general release from October. Watch the trailer...

A frighteningly focused man of many talents, passports, and identities, arrives in Northampton - a strange and haunted town in the heart of England. On a mission to locate a stolen artifact for his menacing client, Fletcher finds himself entangled in a twilight world populated with vampires, sleeping beauties, Voodoo gangsters, noir private eyes, and masked avengers. He quickly sinks into a bizarre and delirious black hole, that is hidden just beneath the surface of this seemingly quiet town. Soon enough Fletcher discovers that dreams and reality have been blurred and there might no longer be a real world to go back to... Welcome to The Show.

Starring Tom Burke (C.B. Strike) and The Serpent’s Ellie Bamber, and featuring a rare on screen appearance from Moore himself, The Show is the feature length directing debut of award-winning photographer Mitch Jenkins (Showpieces).  Set in an extraordinary alternative universe, with dazzling and delirious visuals, and a brilliantly enigmatic performance from Burke, The Show features Moore’s characteristic mischievous humour, eccentric characters and delightfully labyrinthine plotting. It’s a cinematic experience you won’t want to miss, and won’t soon forget!

THE SHOW was produced by Tom Brown at LEX Films and Michael Elliott and Jim Mooney at EMU Films and financed by the BFI and Lip Sync.
THE SHOW WILL PREMIERE AT FRIGHTFEST ON 27 AUGUST AND BE RELEASED ON ALTITUDE.FILM AND OTHER DIGITAL PLATFORMS FROM 18 OCTOBER
Image - Altitude
Email ThisBlogThis!Share to TwitterShare to Facebook