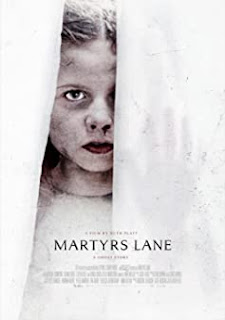 I can never resist a story which is reminiscent of the English Gothic literary tradition, and ‘haunted house’ tales like Martyrs Lane continue to appeal to me. This is the third feature film directed by actress Ruth Platt and it gives us an unusual perspective regarding this conventional Gothic premise by positioning us behind the eyes of a ten-year-old girl.

Martyrs Lane tells the story of a little girl named Leah (Kiera Thompson) who lives in a large vicarage but has a lonely home life. She has all the material comforts, but those closest to her don’t give her the love or attention she craves.

The relationships in Leah’s family are strained, particularly between Leah, her mother Sarah (Denise Gough) and her sister Bex (Hannah Rae). Her older sister torments her, and her distant mother seems as if she is sleepwalking through the motions of parenting and the tasks required of her in the parish community.

The only person who pays her any real attention is her father, but he has a busy life as vicar to many demanding parishioners. It’s a less than ideal situation. The simmering tension manifests itself in a variety of ways, particularly in things overheard or left unsaid, and this takes its toll on young Leah. Leah is the victim of asthma attacks which worsen in moments of stress or fear.

One day Leah encounters a strange little girl hiding in the woods near her house not long after big sister Bex has been trying to scare her with stories of the ghosts of murdered Tudor monks who walk there at night.

It’s a pretty little girl of her own age, with golden ringlets, dressed in a white dress with angel wings. Leah isn’t scared, in fact she is concerned that the little girl may be lost or in trouble. Innocently, Leah invites her to take refuge in the vicarage. That evening, the girl comes tapping on Leah’s bedroom window asking for her help. Perhaps this is a little odd, as Leah’s bedroom is not on the ground floor.

The child begins to visit Leah’s bedroom regularly at night, and they play, as little girls do. Having a friend of her own age initially brings Leah some much needed companionship and comfort. However, it soon becomes evident that the ‘little angel’ is playing a game that requires Leah to solve the mystery of the unspoken secret that has been plaguing Leah’s relationship with her family.

The little visitor tricks Leah into a ‘treasure hunt’ that gradually reveals the events which created the unspoken barrier between Leah and her mother for her entire life.

The little girl gives Leah hints which result in her visiting some forgotten places and collecting a selection of random objects. However, soon the game unfolds into something much more unsettling and traumatic. The ‘little angel’s appearance begins to deteriorate, and she becomes more insistent, imposing increasingly unwelcome visits on Leah, who now realizes she is not dealing with an ordinary little girl in trouble.

The things that adults don’t share with children, perhaps with what they think are the best of reasons, can often become in themselves a source of fear and confusion. Martyrs Lane succeeds in combining a ghost story with a touching family drama. Rather than opting for the obvious scares of an out-and-out horror film, it centers around the experiences of children struggling to comprehend the odd and enigmatic way adults can behave.

Young Kiera Thompson is impressive in the role of Leah, a little girl who is trying to discover not only her own truth, but also the truths that the adults have hidden from her. Her relationships with her family and particularly with her ghostly friend (Sienna Sayer) are handled in a plausible and sensitive way.

The film gradually builds from our initial sympathy for a lonely little girl into something more disturbing and upsetting, where the demands of the past begin to impinge so drastically on the present they become impossible to ignore, with devastating consequences.

Martyrs Lane uses the cultural beliefs about the special abilities which children have to see things that adults try to ignore, or refuse to see, while delicately examining the devastation that a certain kind of tragedy, and the grief it creates, can wreak upon a family and resonate throughout a community.

Image - Courtesy of Shudder
Email ThisBlogThis!Share to TwitterShare to Facebook