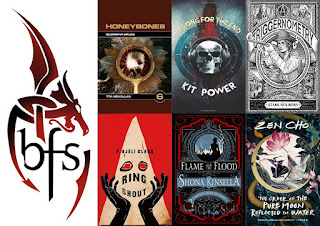 Tony Cross read all the novellas shortlisted for this year's British Fantasy Society Awards. Here are his thoughts...

I read the six novellas on the shortlist for the British Fantasy Awards 2021. This would traditionally be the point where someone says, “so you don’t have to.” But you kind of do. All six books on the shortlist are worth reading. There’s not a dud among them.

I’m going to confess here that I’m not sure how you draw the line between short-story, novella, and novel. It seems an arbitrary division, but I like novellas as a good introduction to a writer, especially in fantasy and science-fiction when you can be a little wary of picking up the first brick in a multi-brick series. They give you a clear idea of whether a writer can write, what kind of ideas they come packing and whether they can sustain those ideas.

The six novellas are
Honeybones by Georgina Bruce;
Ring Shout by P Djèlí Clark;
A Song for the End by Kit Power.;
Triggernometry by Stark Holborn;
The Flame and the Flood by Shona Kinsella,
and The Order of the Pure Moon Reflected in Water by Zen Cho.
Below are my bite-sized thoughts on each book. If you want to know my longer thoughts – and why would you do that? - then there’s a full review of each book on my Goodreads account. 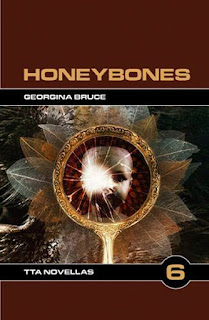 Honeybones by Georgina Bruce leans more towards horror, a genre I don’t dip into often, but I found it used familiar gothic vibes to take on big, dark topics. Beautifully written it isn’t an easy read, but it repays the effort. It reminded me a little of Piranesi by Susanna Clark in shadow. If that makes sense. 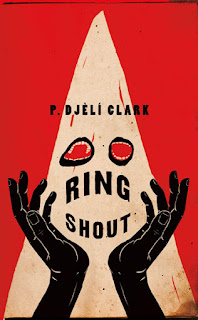 Ring Shout by P Djèlí Clark also has a more horror vibe to it. It is an anti-Lovecraft story. It takes Lovecraftian tropes – creatures from other dimensions, gibbering cultists etc – and then flips them around to tackle issues of racism and power. It has a foundation in real life historical events and culture but in Djèlí Clark’s world it is the white people that turn out to be gibbering cultists. This has some effective body horror. This is the novella most likely to be turned into a film or TV series from the list, although A Song for the End might be up there. 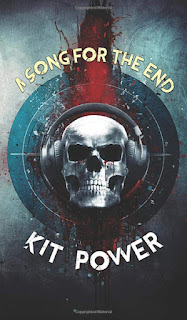 A Song for the End by Kit Power takes a brilliant central McGuffin and runs with it. It’s a pandemic story in its way, but the pace is relentless and the twist at the end – if twist is the right word – works spectacularly well. You don’t see it coming. This was possibly the one of these novellas that I could see being turned into a Doctor Who story. 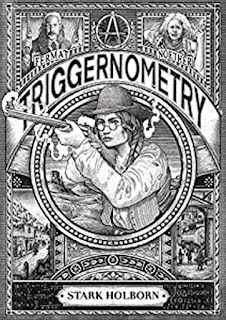 Triggernomentry by Stark Holborn is the shortest book here and probably the one with the most entertaining central concept: a mash-up of Westerns and Magic. Except the magic here is mathematics, which has been forced underground in an alternative USA. It takes a story we are familiar with from lots of Westerns, but then uses the maths to do something fun with it. 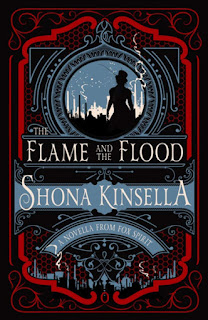 The Flame and the Flood by Shona Kinsella has a similar theme of magicians in hiding. The main characters are running an underground railway of sorts trying to smuggle out the magically sensitive from a country that turns them into slaves. Kinsella creates an interesting world and magic system. 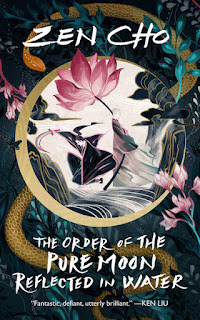 The Order of the Pure Moon Reflected in Water by Zen Cho was probably the novella I had the most fun with. Perhaps because it was the one with most humour in it. But I also found the central characters to be the ones I most enjoyed the company of. It’s set in a culture that is an alt-Asia. There is a colonising power that likes to take the treasures from its colonies and stick them in museums where they aren’t probably appreciated, there are bandits, there’s a Monk and there are interesting secrets to be discovered.

As I said all six are worth reading. If I was forced to pick a winner, I’d probably pick Ring Shout (just). However, you’d be well within your rights to pick any of them. With a total page count of somewhere around the 695-page mark you could make time to read all six of them in the time it takes you to read the first volume of a chunky trilogy. What’s stopping you?
Follow Tony on Twitter @Lokster71

The winners of all the British Fantasy Society awards will be announced at FantasyCon in September.