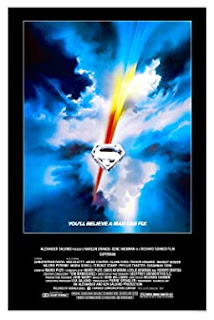 In a world where the superhero genre is bigger than ever in the film industry, and the biggest box office movie in history is Avengers Endgame, it seems almost insane that I don’t remember any of the Superman movies, whether they’re the newer ones directed by Zack Snyder or earlier than that.

Don’t get me wrong, I’ve seen Batman vs Superman and Justice League, though technically you could class both of those as “Justice League movies”. I even remember watching a part of Superman Returns (vaguely) when I was younger and watched Man of Steel in the cinema (though weirdly don’t recall any of it). I even studied a scene from the original Superman for my film GCSE exam, so somehow the character has played a big part in my life without me remembering anything from any Superman movies (except for that famous helicopter scene in the first film) and I felt it was time to try and change that.

This Superman film seemed different to the likes of Marvel movies or even Justice League, in that it felt like it spent a lot of time setting up Superman’s origin story, his upbringing and his time as Clark Kent. I found an appreciation for it because of that reason, in fact I even may go as far as to say that I preferred the Clark Kent scenes in this film to the Superman scenes, with maybe an exception to the final sequence where Superman has to save California from two missiles; and I think that Superman scene had more of an impact because it was Clark Kent’s personal life at stake, as well as California. This is probably why this film spends a lot of time setting up Clark's personal life, so we can understand why the decision to save California over Lois Lane was a difficult one for him to make.

I’m sure the scene will have had even more of an impact when the film came out, because the threat of nuclear annihilation back then was a very real issue, though, as a 20 year old, I can only compare it to other “Superhero action” films such as the likes of Zack Snyder’s Justice League or Avengers Endgame, and I should feel fortunate for that.

In the final sequence of this Superman film, the conclusion to the lesson “you must never interfere with human history” by Superman’s birth father was incredibly clever. When I first heard the line I hadn’t understood the meaning of it, especially seeing as the iteration of Superman that I’m familiar with (Henry Cavill) cannot travel back in time.

In fact, the more I thought about it, Superman being able to turn back time by moving the Earth’s rotation the opposite way seemed extremely unbelievable, especially after a second watch, though I think the whole film needs to be viewed with a suspension of disbelief. I also kind of wanted Superman to find a way to save Lois before she would eventually die from drowning in the Earth’s soil, because, again, the time that Clark Kent spends with Lois, just from how he tries to connect with her in the work place, shows how much he cares. Maybe that’s exactly why Lois should have died though, as a consequence of breaking his father’s law on interfering with human history, and her death would have been more impactful than her being brought back.

If it wasn’t for Christopher Reeve’s excellent performance as Clark Kent and Superman then I’m not sure how I would have felt about the film. Part of the reason why he was so great was because of how he was able to behave so differently as Clark Kent and, whilst his clumsiness was on purpose, it helped me relate to him a little more (being a little clumsy and shy myself). Clark is a lot like Peter Parker in the way that they both behave like they are the least likely to be their superhero alter egos, however with Clark it’s even more important when it’s as easy as removing his glasses for him to look like Superman.

The romance between Lois and Superman though didn’t seem as “excellent” as Reeve’s performance though. I suppose it’s probably how romance was executed at the time the film came out, but hearing Lois Lane ask Superman to use his X-ray vision to guess what “underwear she’s wearing” during their first conversation just seemed as uncomfortable to watch as the characters seemed to be when talking about it. I suppose the idea was to make it a “comic book romance,” similar to how Lex Luthor comes across as a “comic book villain” in the film.

Speaking of Luthor, I can’t quite understand his motives compared to other superhero villains, such as Thanos and his desire to lower the population for the greater good, however Lex is still intimidating enough for me to appreciate him as a formidable villain, especially when you simply think of Luthor as a genius madman. Though, again, it doesn’t quite help us understand why his lackeys follow him around.

Regardless, this film made for great “feel good” viewing and I certainly understand what is so iconic about the soundtrack when the credits rolled. From what I found about how it was made against impossible odds (in this case, being over-budget) maybe this film could have determined the future of the superhero film genre, and is responsible for everything we know about it today. In short, I felt fulfilled and can’t wait to revisit films like “Man of Steel” with a new appreciation of Superman’s origins.

Film Fest in the City is part of Edinburgh International Film Festival, showing classic films on big screens in St Andrews Square, Edinburgh. Get free un-ticketed entry to all screenings by walk-up on a first come, first served basis, subject to availability of space. On arrival, please go to the ‘Event Entrance’ located on the south-west corner of St Andrew Square (Jenners’ Entrance).