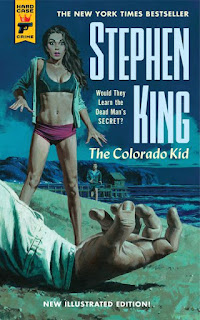 On an island off the coast of Maine, a man is found dead. There's no identification on the body. Only the dogged work of a pair of local newspapermen and a graduate student in forensics turns up any clues.

But that's just the beginning of the mystery. Because the more they learn about the man and the baffling circumstances of his death, the less they understand. Was it an impossible crime? Or something stranger still...?

I am not the world's biggest Stephen King fan, nor am I an aficionado by any stretch of the imagination. I do like some of his books and I am frustrated by others but, when he delves into the detective noir style of Hard Case Crime, I am constantly enthralled. Each one of his noir-esque tales is surprising and fresh and yet also a doff of the cap to those writers who came before. Joyland was a genre bending masterpiece, taking everything good about noir adventures and throwing some supernatural elements in there for good measure. It was like reading a grown-up Scooby Doo book. On the complete flipside of that is The Colorado Kid, which is essentially a long conversation. There is no real action to speak of, just a mystery being told like we would tell stories to each other when we were younger. It is just as enthralling as Joyland but it’s a book that will garner some negative reviews from people that like their stories tied up in a great big bow because [SPOILERS] there is no resolution to the tale being told within the book.

The thing is, not everything in life has a satisfying Hollywood style ending. Life is often disappointing and ridiculous, and you are left to make your own minds up about things more often than you possibly realise, so it's not too much of a stretch to imagine an author wanting to leave his audience to guess what happens next. Maybe every other book from Mr. King has a great ending, I don’t know, as I’ve said I’m no aficionado, but I found The Colorado Kid to completely reinvigorate my love of this particular genre of storytelling. It was about humanity and intrigue, it was about the daily relationships we have with our neighbours and friends and colleagues, it was a character study of conspiracy and the unknown and showed that not everything is provable, or black and white, and that it is okay, as a reader, to be left with questions when a book ends.

The Colorado Kid is a unique look at unsolved crime wrapped up in an old school Murder She Wrote style that doesn’t care if you whether you get it or not, just so long as you’re thinking and enjoying.
Follow Steve on Twitter @STBwrites
Image - Titan Books