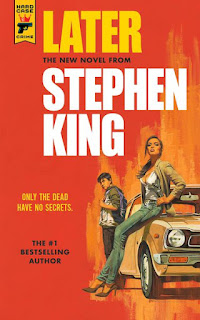 The Complete Hard Case Crime Stephen King Collection comes out later this month. Steve Taylor-Bryant read Later...
The son of a struggling single mother, Jamie Conklin just wants an ordinary childhood. But Jamie is no ordinary child. Born with an unnatural ability his mom urges him to keep secret, Jamie can see what no one else can see and learn what no one else can learn. But the cost of using this ability is higher than Jamie can imagine - as he discovers when an NYPD detective draws him into the pursuit of a killer who has threatened to strike from beyond the grave.

If you read my review of The Colorado Kid, you will remember that I like Stephen King when it comes to Hard Case Crime and the noir genre. You’ll remember me compare Joyland to a grown-up Scooby Doo story, and you’ll have noticed that I loved The Colorado Kid despite absolutely nothing happening in it except for a conversation. Well, Later changes gear again and, once again, takes what’s great about the crime genre and twists it about until its something wholly new. It also answers the question I know we’ve all asked which was ‘What would The Sixth Sense be like if it was written by someone deranged or on a lot of drugs?’ because the comparisons between Jamie in Later and Cole in The Sixth Sense are there; you cannot have a child see dead people anymore without paying Haley Joel Osment at least the courtesy of a namecheck. But it's more complex than Sixth Sense was, Later is a dark look at facing evil in the eye, at mortality, at the fine line of wanting to help people and just not being brave enough too and is exhilarating from page one.

There is so much to love about this book. Jamie is a character that we grow with has he matures, we care about him and what he feels and what happens to him, he is humorous and human which is a noble skill to accomplish when there is so much in your life that could knock you off kilter. The crime element of Later is superbly plotted as you would expect from a novel on the Hard Case Crime label and there are twists galore as the story flows.