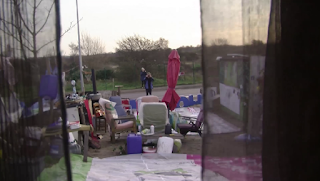 The Blue House is a 55-minute film, made by Hamedine Kane. Kane is a Senegalese-Mauritian filmmaker. It’s about Alpha, an artist who has turned his self-built cabin in Calais Jungle into a sculpture. Using plastic chairs, cassettes, and water bottles. Alpha says he’s trying to create something that reminds him of his Fulani home with its thatched roof. You might say he’s trying to hold on to himself in a place that is stripping people of their dignity. Or I felt that.

Alpha is a fascinating man. Kane doesn’t sugar-coat Alpha either. I think you get a warts and all portrait of what he’s like. The interesting thing is the way that “The Blue House on the Hill” starts to prick the interest of the art world. Alpha starts to get visitors who want to get hold of the house for exhibitions. Kane doesn’t really dwell on this too much. It’s almost peripheral to the chats that Alpha and Kane have talking about their home and getting on with art.

The politics of what’s happening are not hammered home. Kane doesn’t dwell on the abhorrent nature of British immigration policy or the fact that we ignore the fact that immigration to Britain is as much a consequence of imperialism as it is capitalism. Although you can argue the two are inescapably connected. It’s there in the mere existence of the Jungle. It’s there in the stories that Alpha tells of his journey to The Jungle. Indeed, there’s a lot of good things in those stories too. The way relations – or strangers – help. But there’s also the bad stuff: the cost of trying to illegally cross boarders or having no papers.

The film ends with “The Blue House on the Hill” being taken to Paris. Alpha isn’t though. Alpha is staying in the Jungle waiting for his chance to get to Britain. We’re left with an empty patch of land. The House has gone. The art world has gone because they got what they wanted. We don’t see Alpha again.

This came out in 2020 so Covid doesn’t get mentioned. Part of me was wondering how Covid affected the Jungle. I then realised that I’d put the Jungle entirely out of my mind. Out of sight, out of mind. I hope Alpha is OK. He seems like a survivor but the last couple of years have put a lot of strain on us all. Well, most of us.

I found myself feeling a little hopeful and a little sad at the end. Hopeful, because Alpha and his art gives us a little hope. Sad because the Jungle exists. Or places like the Jungle. How many people are fleeing one place to find a better life in another and why do we treat them so badly?

Anyway, enough of my rambling. This is a film worth watching. I’ve possibly made it sound tediously political, but it isn’t. It’s a very personal film.
Follow Tony on Twitter @Lokster71
Image - Open City Docs
Email ThisBlogThis!Share to TwitterShare to Facebook