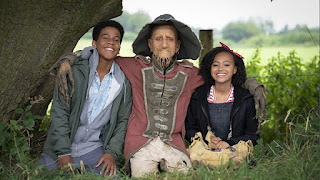 Three new hour-long episodes of Worzel Gummidge are set to return to BBC One and BBC iPlayer later this year...

Mackenzie Crook has created three new one-hour films: Guy Forks, Twitchers, and Calliope Jane - inspired by the classic books by Barbara Euphan Todd, in which he will once again direct and star.
He will also reunite with fellow Detectorists' star Toby Jones in one of the episodes where Jones plays all six roles of The Village Committee in the Guy Forks episode: the Baker, Butcher, Mayor, Postmaster, Publican and Alderman, alongside Paul Kaye (After Life) who plays Guy Forks. Comedian and reigning Strictly champion Bill Bailey (Black Books) co-stars as Mr Peregrine in Calliope Jane, together with Nneka Okoye as the eponymous Calliope Jane.

Leopard Pictures, part of Argonon Group, are again partnering with Treasure Trove Productions to bring these glorious stories to life for an audience of all ages. The films have been commissioned by Tanya Qureshi, Head of Comedy for the BBC, and Charlotte Moore, Chief Content Officer for the BBC.

Mackenzie Crook says: “I’m thrilled to bring three new episodes of Worzel Gummidge to audiences this year and to announce the quite brilliant cast. We had a happy summer making these films and I hope some of that comes across on screen.”

Kristian Smith, executive producer, added: “It’s always the greatest joy and privilege to be in Scatterbrook and the Ten Acre Field. Our exceptional cast and crew make the entire experience such a pleasure. Mackenzie Crook leads with humanity and that translates in these beautiful films. Our three original stories will charm and amuse audiences of all ages.”

Tanya Qureshi, Head of Comedy at the BBC, says: “Worzel and the magical cast of characters that inhabit Scatterbrook are back once again, and we can’t wait for audiences to see what Mackenzie and the crew have brought to life in these new instalments. These wonderful films are exactly the comforting tonic we could all use right now!” 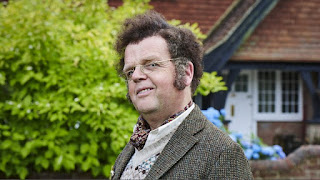 It’s the build-up to bonfire night and a new face has arrived in Scatterbrook. Worzel’s cousin, Guy Forks, has taken his rightful place at the top of the bonfire, but an argument between the old friends leads to a competition to prove who can do the other’s job better. With The Bonfire Night Committee distracted, Guy convinces Worzel to swap places, but it soon becomes clear that Worzel has bitten off more than he can chew. With Worzel stuck on top of the bonfire, John and Susan turn to Aunt Sally for help, but can they find a way to rescue Worzel before time runs out?
Twitchers

After a raging thunderstorm, a flock of rare choughs turn up at Scatterbrook Farm. Keen to seize the opportunity of scaring such a rarely sighted bird, Worzel enlists the help of Susan and John. But their plans are soon scuppered once word of the choughs gets around, and a group of avid twitchers move in before he’s even had his chance. To make matters worse, the twitchers’ arrival forces Mr B to come to face to face with his old birdwatching rival, Lee Dangerman. With the twitchers refusing to leave, can the children come up with a plan to help scare the choughs and save Worzel and Mr B from embarrassment?
Calliope Jane

Susan and John are excited when they learn that F R Peregrine’s Travelling Fair is coming to Scatterbrook for one night only. But as much as he’d love to join his friends, Worzel can’t be seen wandering around by humans. He recalls the legend of a fairground with an enchanted organ. It’s believed that, with the right music, the organ has the power to send humans to sleep so that scarecrows can enjoy the rides without the fear of being seen.

At the museum, Aunt Sally finds herself agreeing to go on an adventure with another ex-fairground attraction, Calliope Jane, and it turns out Worzel isn’t the only scarecrow who wants to attend the fair... As the scarecrows descend, the risk of being seen intensifies, but will the legend of the enchanted organ turn out to be true?

The three new films, written and directed by Mackenzie Crook, are co-produced by Leopard Pictures and Treasure Trove Productions for BBC One. They are executive produced by Kristian Smith for Leopard Pictures, together with Mackenzie Crook and Lisa Thomas for Treasure Trove Productions and rights holder Patrick D. Pidgeon for Pidgeon Entertainment, Inc. The producer is Matt Carver.

All previous episodes are available to watch now on BBC iPlayer.
Email ThisBlogThis!Share to TwitterShare to Facebook