Documentary - Songs for the River 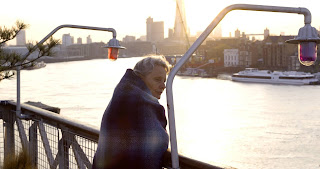 On recently at Open City Documentary Festival, Tony Cross sings the praises of Songs for the River...

Songs for the River, directed by Charlotte Ginsborg, is a documentary about the pandemic. It’s not a broad national review of what happened and when. It’s the specific story of a group of people living in a housing co-operative in Rotherhithe.

It’s a mixed bag of people: schoolteachers, gardeners, artists, NHS frontline workers, probation officers. It seems Ginsborg didn’t expect to make this documentary. It started off just as a film of singalongs that were organised during the first lockdown. This story is interwoven with the overarching national and political story.

Ginsborg’s take is quite positive. The people she talks to focus on the creation of community and the hope that the pandemic will change people’s priorities. It’s nice. But I don’t feel like that’s what happened to me. It feels like we learned to be more selfish. Some people built communities but other people were annoyed by mild inconvenience and spurred on by the over-confident under-informed public figures, politicians and grifters. I feel Britain is more divided post-pandemic than it was before. And people can see a path to wealth and power through the division. I wish England was like Ginsborg’s version of it and perhaps I’m just old and cynical. I don’t think it is.

But watching this gives me a little hope that I’m wrong. I really hope I am. For that reason alone, I’d recommend watching this film.

Ginsborg seems to have nice neighbours. We see the pandemic through their personal experiences. 2020 seems like yesterday but it also seems like it was a hundred years ago. It seemed like the shortest year and the longest year. Ginsborg tells the story well.

I think there will be hundreds of pandemic documentaries in a year, but I suspect the full story won’t be told for a lot longer. Too many politicians have reasons to avoid getting to the bottom of it for anything near the truth to be revealed, but films like Ginsborg’s might be the first small local steps in telling that story.

Another reason why I enjoyed this was listening to people expressing some of the same feelings I had during 2020. Ginsborg also gets some great shots of London and the Thames during that eerie period where London looked like it had been emptied out as part of some alien invasion or zombie apocalypse. There’s a shot across the Thames where the Shard looks like an alien war machine.

So, yes, I recommend this. Perhaps it helps that Ginsborg’s people are people I like. Perhaps it helps that Ginsborg is trying to tell a story that is just beginning to be told. There will be other versions of this story – fictional and factual - but this is a gentle first step. Gentle, but with sharp edges.
Image - https://www.charlotteginsborg.com/
Email ThisBlogThis!Share to TwitterShare to Facebook