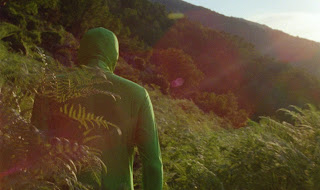 The Invisible Mountain is a hallucinatory travelogue based on Mount Analogue, René Daumal’s avant-garde novel which describes an expedition to the summit of a mountain, floating in an ocean, which cannot be seen, only deduced. Russell follows an unnamed traveller who journeys from Finland to Greece in search of a similarly unreachable mountain. His elliptical quest leads him to an Estonian lakeside, a secluded beach, and to numerous encounters with a touring group of musicians whose immersive performances include the extended psych-tinged interpretation of “Come as You Are” that opens the film. Equal parts non-fiction cinema, concert film, road movie and spirit quest, The Invisible Mountain is a heady inquiry into the transcendent possibilities of cinema.

There are many film and documentary festivals that a person can choose from these days and, whilst I get excited at receiving accreditation to some of the big ones, there is always a flutter in stomach and a smile on my face when it comes time to attend (virtually this year) Open City Documentary Festival. A smaller documentary festival that maybe the everyman isn’t aware of, it is here that I have watched some excellent films in previous years, often the types of films that don’t always get a wider release or much press coverage. I find that these types of festivals, and Open City in particular, allow me to experience more experimental work and that triggers something akin to wonderment in my soul. This year is no exception and first up for me is a film from Ben Russell (A Spell to Ward Off the Darkness) and a stark reminder that unconventional is something I am definitely going to get this year.

The Invisible Mountain, from what I gather from the film, stems from Russell’s fascination with Mount Analogue by René Daumal, a posthumously published and unfinished experimental novel, and it seems to be a journey. However, the film starts with Finnish band Olimpia Splendid playing, some weird purple lighting and its not until the 16 minute mark we even get an opening title. Then the camera follows Tuomo Tuovinen, a slow walking, bespectacled and bearded chap on a trek, as the film's protagonist I assume. I say "assume" because, if I am honest, I didn’t get the point in The Invisible Mountain. Maybe my mind is not as accustomed to the experimental as I like to think, maybe there is a lacking somewhere in my education but if there is a point or a philosophical reason in The Invisible Mountain, I didn’t find it. That doesn’t mean, however, that I didn’t enjoy the film because I really did.

There are some wonderful shots of Liturgy drummer Greg Fox and a feel of a psychedelic art installation about the film that genuinely appeals. Come the end, it felt like I had traversed somebody else’s drug trip or hallucination rather than watched a fly on the wall documentary but that’s okay. Experiencing something new is the whole point of a film festival to me and, since The Invisible Mountain is more art than it is informative, and the beauty of art is the beholder, I can forgive myself for my philosophical and educational deficits here and just marvel in the sensory stimulation that took me over. I may not have gone on Russell and Tuovinen’s journey but I went on a journey of my own. Those of you out there that like and are passionate about the transcendent, almost shamanic and experimental, ways to experience their media will no doubt grasp the true spiritual meaning behind the film and garner a deeper appreciation for the work. I just had a blast nonetheless, regardless of my understanding.
Follow Steve on Twitter @STBwrites
Image & synopsis - Open City Documentary Festival
Open City Documentary Festival runs online until 23rd September. Find out more about the festival and browse the online programme here: https://opencitylondon.com/
Email ThisBlogThis!Share to TwitterShare to Facebook