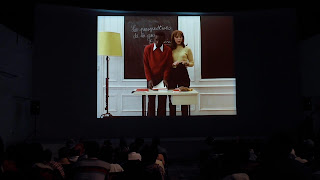 Just a Movement, directed by Vincent Meessen, is an attempt to tell the story of Omar Blondin Diop, a Senegalese intellectual and activist who was (probably) murdered in Gorée prison in 1973 by soldiers of Léopold Sédar Senghor’s government. Officially it was suicide but the truth has never really been revealed.

Diop also features as himself, the student radical, in Jean-Luc Godard’s La Chinoise. Meessen uses clips from that film and adapts some of the techniques to create a film that shows some of its making, although that fades slightly as the film goes on it becomes more like a traditional documentary. The story is told through archive footage, documents, eyewitnesses, and contemporary footage.

Indeed, Meessen uses contemporary footage to make some interesting points about the nature of modern colonialism. There’s a section which talks about the visit of the then French President Pompidou to Senegal with the visit of the Chinese Vice-President to open a museum. Modern colonialism doesn’t involve invasions and conquest, it is all about soft power. It is still about access to the abundant natural resources of Africa, but it is done through infrastructure projects and education. It’s about the building of networks. There’s an interesting point made that as Western countries, fearful of immigration, make it harder for students from the developing world to study in the West they are surrendering the next generations of leaders to the Chinese (and others.) Colonialism in the 21st century is about soft power and multi-national corporations. While watching this I realised that it is easy to look at modern China not as some Marxist superpower but as the biggest multinational corporation in the world.

This is a film that, if you let it, makes you think not just about the past but about the present. It’s an hour and fifty-one minutes long but I was never bored. I was occasionally a little confused, but that was mostly with the clips from Jean-Luc Godard. It’s interesting that Vincent Meessen was born in the US but now lives in Belgium because this felt like the kind of documentary that a European would make. It takes theory seriously. It wears its intellectualism proudly. In a way that perhaps a British film would not. I have said before in my reviews that there is a cultural difference between Britain and Europe about intellectuals and about taking arts and ideas seriously. There’s a tendency in Britain to disdain people who take these things seriously. The word pretentious gets bandied about. But that never seems to be the case in Europe.

I’ve gone off at a tangent again. I enjoyed this film. I found the story fascinating. I liked the way it was made. It made me think and it made me hope that, one day, his friends and family might get to the truth about his death. Especially as there’s a moment in the film, probably the only one where real emotion escapes, when his brother describes having to collect his possessions from the police and take them home and the brother breaks down. Even now it hurts: “They just hand over these documents,” he says, “but it’s a man’s life.”

That reminded of the title of Pumla Gobodo-Madikizela’s book “A Human Being Died That Night”, which is her account of her conversations with Eugene De Kock, who murdered hundreds of people on behalf of the Apartheid government of South Africa.

“It’s a man’s life.” That’s the story of Just a Movement. But it is also much more than that. It is the story of the world, illustrated through the example of one man.