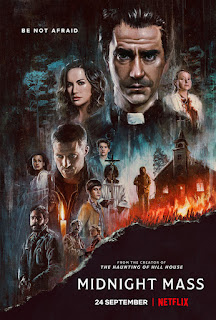 With NO SPOILERS, Steve Taylor-Bryant preaches to the choir about Netflix's new limited series, Midnight Mass...

Not being the biggest fan of horror as a genre has its downsides. I can’t stomach loads of blood and gore anymore, I could in my youthful days and remember watching Saw and looking forward to more of those films, but I tried watching Saw 6 or 7 a few years ago and really cringing. Something in my brain just won’t allow the genre to work for me now, so I’m missing out on a lot of what fans are telling me is a resurgent medium full of new and interesting storytelling, strong female roles, diverse casts and crews and all those things I really want to see in my entertainment so desperately all because blood and genuine terror make me squeamish. On a plus note for me, I can do clever ghost stories that don’t have a lot of gore and torture, either physically or mentally and, over the past few years one storyteller in particular has given me all those diverse casts and strong roles for unrepresented people.
Mike Flanagan manages to tell a great horror genre story that is palatable to my defunct old man brain and gives me interesting and new takes on characters. The Haunting of Bly Manor was one of my personal highlights during lockdown. A really well crafted ghost story that worked on more than one level and showed me that Rahul Kohli (my pick for a future Doctor Who) had some real range to back up the comedic chops of iZombie, and that T’Nia Miller was an actor I needed to see more of. The beauty in Flanagan’s work is he often reuses actors from previous shows in new ones and so, when Midnight Mass was announced, I got really excited. An isolated island story, a heavy religious element, a long form horror story, and returning cast members from previous shows. What could wrong?

Nothing. Well lots of things go wrong for the residents of Crocket Island, but story and casting wise? Last time I was this hooked on a television show, nay event, was Chernobyl. I can’t say too much about Midnight Mass despite this being a review of Midnight Mass, because I really don’t want to drop spoilers on a show I think everyone should watch. The main horror elements of Midnight Mass build slowly across many episodes before a crescendo towards the end but even that’s not why I think this show is so special. You can take the clever horror story away and the show still works, because it has layer upon layer of human stories contained within it. It has generational issues to deal with, it has isolation issues, it has a community trying to rally around its main industry of fishing after an oil spill stories, it has young people thinking differently to older people, it has a sense of failure amongst some of its residents and it has religion. 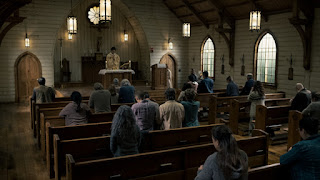 All of the undercurrent storylines are vital to the whole and the writing on Midnight Mass is so good, so clever at tying often insignificant sounding parts and creating a hugely significant story from them. Each individual cast member gets enough screen time to be compelling and make you care about them that by the time you realise you are even watching a horror show the stakes are higher for you because of it. As with any well crafted show that has a large main cast some characters will speak to you more than others; for me I felt something akin to understanding with Riley Flynn (Zach Gilford) for example due to very personal issues I’ve had that are similar to his but the three performances that left me completely stunned and a little in awe were those of Samantha Sloyan as Bev Kean, Rahul Kohli as Sheriff Hassan, and Hamish Linklater as the Father.

Bev Kean is the kind of sister/nun/religious teacher that I grew up fearing at Sunday School and who has grown from the fringes of horror films into the political mainstream of late. Samantha Sloyan, who I only knew as Penny from Grey’s Anatomy, made me hate and despise and question her, and religion in general, and did so with a performance that will surely be remembered at award season if Netflix television shows are allowed on those. Of all the characters good and bad on any show, it’s Bev Kean who has evoked the most emotional response from me, and that’s hard to do.

Linklater is a star, ever reliable, always watchable and as Midnight Mass grew so did his role, his dialogue, his persona and, come the end, you look at Hamish Linklater as the Father and hope that acting and drama schools show their students this role because the journey he takes that character on, the different moods and personality traits he has to show, was masterful.

And then we come to Rahul Kohli, who I already liked as an actor and follow on social media where he is endlessly entertaining and always learning as a human being and bashing away trolls for fun. When you are going to drop a Muslim character in a traditionally white western town setting though you tread a fine line between interesting and trope. What could have been your usual figure of ridicule was far from the usual. Kohli played Hassan unlike I’ve ever seen a Muslim portrayed in a predominantly “white story” before. He educated me, his humanity was put front and centre and when conflict between Catholicism or the way it was practiced on the island and his Islamic faith came to the fore the level of understanding and restraint Hassan showed was incredible. Add in a very interesting and tragic backstory and you have a man, a father, a follower of religion, and a tortured soul like everyone else and to see that portrayed was a very refreshing take on a difficult subject matter that I think was handled delicately, humanely, and yet still played to my entertainment. I know Rahul has gone to great lengths on social media to rightly thank those behind the scenes who helped and advised but you can have all the support you like you have still have to step in front of the camera and perform, and my word what a performance.

I’ve actually managed to say a lot about Midnight Mass without dropping spoilers or even touching on the horror side of the story and I hope it’s enough to tempt you to give it a go yourself. You won’t regret it!
Follow Steve on Twitter @STBwrites
Watch Midnight Mass on Netflix
Image - EIKE SCHROTER/NETFLIX
Email ThisBlogThis!Share to TwitterShare to Facebook