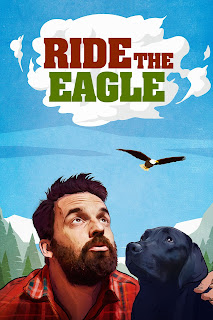 Coming to digital download in October, Lightbulb Film Distribution has shared the poster and trailer for new comedy Ride The Eagle...

Leif (Jake Johnson) inherits a picturesque log cabin when his estranged mother Honey (Susan Sarandon) dies. But there is a condition; he must first complete her elaborate to-do list. With the help of his ex (D’Arcy Carden), local eccentric (J.K. Simmons) and Nora, his faithful canine companion, Leif embarks on a hilarious journey of self-discovery.

Johnson co-wrote the screenplay with director Trent O’Donnell, the pair having previously worked together on the hit series New Girl.

The film was shot during lockdown and stars Johnson’s real-life rescue dog, Nora.

Peter Thompson from Lightbulb Film Distribution said “We are thrilled to be bringing Ride The Eagle to UK audiences in October. Jake Johnson plays a loveable stoner and his dog, Nora, steals every scene that she’s in. It’s a film that will make you laugh – and that’s something we need more than ever!”

Ride The Eagle will be released on Digital Download from Oct 4th.
Image - Lightbulb Film Distribution