I can imagine growing up with enough trauma would come with feeling all kinds of emotions, especially sadness and anger, which is why it would make sense that the main character in Life is Strange: True Colours, Alex Chen, would have the ability to read those emotions in other people. From the place we meet Alex at the start of the game, she’s had to deal with having an absent parent as a young child, to then be separated from her brother and put into a children’s home.

If you’re unfamiliar, the Life is Strange games are a sort of anthology series that are set in various out of the way towns and about kids who experience some form of loss. There’s always a blend of real-life issues with abnormal events or abilities in the games. In Life is Strange 1 it’s Max Caulfield’s ability to turn back time whereas in Life is Strange 2 it’s about Daniel Diaz and his ability to move objects with his mind. What made the first game great was that the metaphor for “turning back time” to fix past mistakes was taken quite literally. In the case of Max Caulfield, she regrets abandoning her friend when she was needed most.

Life is Strange 2 deals with the very real issue of racism in how Daniel Diaz and his brother have to run away from the law after Daniel lashes out at a cop for killing his dad (despite Daniel's dad not provoking the cop). Whilst it’s great that this game represented the Mexican community, it advertises the brothers as criminals on the run and therefore might be easy for some to not see them as protagonists. This is why I was glad to find that the third instalment, Life is Strange: True Colours, seems to do a great job in representing both the Asian community and the LGBTQ community, in finally allowing a protagonist to have a gay relationship.

In Life is Strange: True Colours, it’s Alex’s ability to understand when someone is sad or angry that is literally a “superpower”. She mentions that she can ‘see the aura of what someone is feeling’, and each aura is colour coded to a specific emotion. From the get-go it certainly feels a lot more grounded than the superpowers that characters in previous Life is Strange games have. The events of this game take place after Alex has left her children’s home in search of her brother Gabe, who she recently reconnected with through social media. However, one “chapter” into the story she loses him again in a mining incident and must uncover who is responsible for his death. 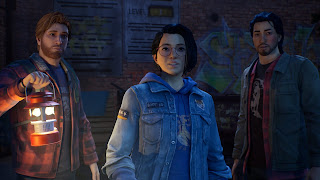 Along the way Alex must learn about her brother’s relationship with everyone in Haven Springs, including Gabe’s long-time girlfriend Charlotte who, like many others, had a strong connection with Gabe. Through various “memories” that are hidden in objects throughout the game, Alex can learn about her brother through the lens of other people and their strong feelings towards him.

Alex’s empathy power helps her truly connect with the Haven Springs community, and the theme of empathising with others is truly tested when as time passes in the small town, she has to come to terms with the fact that she didn’t truly know everyone as well as she thought, but still understand their feelings and motives. In some cases, how much Alex knows about the people of Haven is decided by how much you interact with certain characters.

Alex helps Gabe’s friends the most, as she uses her ability to help Gabe’s friends cope with his death and forms a relationship with them because of it. Depending on player choice those relationships can blossom into something more romantic or friendly, and it’s wonderful that the game offers the player the option to have Alex form a homosexual relationship with Gabe’s friend Steph. Earlier in the game it offers the opportunity to tell Steph that Alex is either attracted to boys, girls or both, however I think having Alex as bisexual by default would have been a braver move in my opinion, but either way the game does still embrace diversity.

I can’t forget to speak about the ending of this game, which I won’t spoil but still need to give my thoughts on the “final decision” the player must make. This game surprisingly ends with a description about one of the players options, which almost plays out like a “Fast-forward” in time, like you’re being encouraged to pick that ending specifically. But, mostly because I believed Alex Chen deserved better, I chose the alternative and was a little disappointed to find the ending I chose was much less detailed.

I guess you could say the ending I chose was supposed to be more open to interpretation, but to me it came off as partially lazy. Nevertheless, the journey was more important than the end, and I can’t wait to replay it to explore the remaining branches of the story that I’m yet to explore.