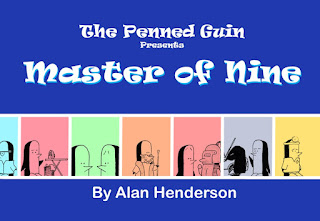 Do you have a serious lack of punning penguins in your life? Now's your chance to change that [and get bugged all day by an ear worm into the bargain - Ed] as Susan Omand explains why you should back Alan Henderson's latest comic book crowdfunder for The Penned Guin: Master of Nine...

When a book’s this much fun,
Full of jokes and bad puns,
That’s a Penned Guin!

Yes, well, anyway. My favourite inky penguins are BACK with yet more highly entertaining comic strips, collected* into a book that’s currently doing well on Kickstarter. It’s called Master of Nine (apparently due to a typo in the “jack of all trades” epithet) and there’s loads more laughs to enjoy.

My favourite comic strip in this collection is, obviously, the comic strip above [she has been singing it CONSTANTLY round the office since she read it – Ed] but there’s something for everyone in this new collection. Yes, some of the puns are bad, and the dad jokes cringy, but that’s what I’ve come to expect and look forward to with every new Penned Guin collection. It’s also good to see the wordplay is just as clever as it has always been too, with several strips garnering an appreciative nod at a turn of phrase as well as a laugh at the joke itself – a literal “turn” of phrase in one case! It’s also educational [what?! – Ed] with maths, science, history and even philosophical puns which require a little bit of fore-knowledge to “get” the joke.

There’s also some cool pop culture references and those observational comedy strips about ageing that one only laughs at because they’re so painfully true! The funniest ones in general, for me, are the visual jokes that play with the layout of the strips, like the one about limbo dancing, the magic carpet one and a scarily realistic looking “eye” related one. So yes, definitely something for everyone and not a dud among them. I highly recommend you get your copy pre-ordered now, and another one to give as a festive stocking stuffer… [I was going to ask if penguins had stockings but that’s a mental image too far – Ed.]

So how do you get your flippers on the latest Penned Guin? The easiest way is to back the Kickstarter and p-p-p-pick up [we can only apologise – Ed] your Penned Guin book, either in digital or proper papery stuff as a “perk” and, because the crowdfunder has already well surpassed its target, the book will very definitely be published. But that’s not all that’s available! You can also “Make it Original” and bag some hand drawn art in the form of an actual comic strip from the book. For the completists, there’s also the opportunity to fill in the gaps in your back catalogue with the “More Books” perk which gives you the three previous books in addition to the new one AND a comic strip.

We’ll let papa Penned Guin himself, Alan Henderson, explain more as you watch the Kickstarter video below and you can support the crowdfunder and re-order your own Master of Nine book here - http://kck.st/3ose48g

* the comic strips in the book have appeared online in the Penned Guin’s daily webcomic but have never been in print before.
Email ThisBlogThis!Share to TwitterShare to Facebook