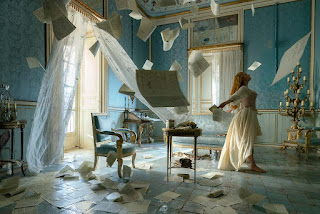 Coming to cinemas in December, watch the trailer for Cyrano...

Award-winning director Joe Wright envelops moviegoers in a symphony of emotions with music, romance and beauty in Cyrano, re-imagining the timeless tale of a heartbreaking love triangle. A musical drama this time out, the screenplay is written by Erica Schmidt, and based on Schmidt's 2018 stage musical of the same name, which itself is based on the 1897 Edmond Rostand play Cyrano de Bergerac, which was a somewhat fictionalised account of the life of a real person, a libertine 17th century author.
A man ahead of his time, Cyrano de Bergerac (played by Peter Dinklage) dazzles whether with ferocious wordplay at a verbal joust or with brilliant swordplay in a duel. But, convinced that his appearance renders him unworthy of the love of a devoted friend, the luminous Roxanne (Haley Bennett), Cyrano has yet to declare his feelings for her — and Roxanne has fallen in love, at first sight, with Christian (Kelvin Harrison, Jr.).
The soundtrack is available to order via Decca Records here: https://Cyrano.lnk.to/OrderNowSo
Image - Universal
Email ThisBlogThis!Share to TwitterShare to Facebook