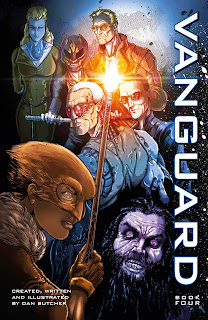 Dan Butcher launches the latest collection of his British based superhero webcomic, Vanguard Book Four, at Thought Bubble 2021 next month...

In the near future, a small team of genetically engineered meta-humans defend our country's interests at home and abroad. They are the Vanguard.
Following the success of Vanguard book three which launched at True Believers 2020, Dan Butcher returns in 2021 to launch book four on November 13th 2021 at the Thought Bubble Comic Art Festival.
This volume collects the complete issues 15-19 of the webcomic Vanguard, previously published on VanguardComic.com. Here's what's coming up:

Join the Wolfshead and her group of compatriots as they confront the tyrannical forces that rule a fractured United Kingdom.

Together, they face an enslaved population tricked into military servitude, a murderous gameshow filled with homicidal meta-humans and brutal gangland forces that control the criminal underworld.

Vanguard has run as a successful webcomic for over 15 years now, and boasts a large and fanatical fanbase the world over. This book is 152 pages long and also boasts work by comicbook creators such as Bill Walko (The Hero Business), Damian Edwardson (ART92) and Cliff Cumber. Vanguard's creator Dan Butcher has worked on various comics including Vyper, Comichaus, El Marvo among many others. He also serves as one of the three hosts on the Awesome Comic Podcast.

WHERE TO BUY VANGUARD BOOK 4: Apart from at Thought Bubble, the book can be purchased online at: https://buysmallpress.com/publisher/vanguard-comic/ or you can read digitally on Comixology: https://www.comixology.co.uk/Vanguard/comics-series/42768
Thought Bubble Comic Convention 2021 is on at Harrogate Convention Centre from Sat 13 Nov 2021 10:00 AM - Sun 14 Nov 2021 5:00 PM GMT. Find out more and buy tickets here.
Image & info - Courtesy Dan Butcher
Email ThisBlogThis!Share to TwitterShare to Facebook