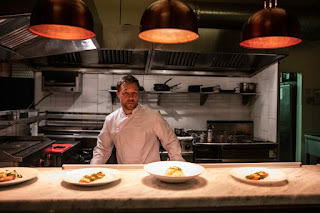 With its UK Premiere at London Film Festival last night, and coming to cinemas in December thanks to Vertigo Releasing, Steve Taylor-Bryant took a trip down memory lane and watched Boiling Point ...

During the busy run-up to Christmas, a single-take snapshot of the immense stress and skills of a talented head chef reveals that things are about to burst behind the restaurant's flash façade.

There are some seriously good technical achievements in Boiling Point. The whole ‘one-take’ aesthetic is flawless with some incredible camera work that gives a real feel to the action and puts you inside the restaurant. It's probably the only one-take that I have seen that actually truly works and doesn’t look like a cheat at any point but, more importantly, it’s the only one-take that seems to be the right choice for the material. Most one-take films, or long scenes, seem to use the approach just because they can whereas Boiling Point genuinely feels like the camera work was done because they should, because it fitted the story it was telling in a unique and refreshing way. The acting was solid as you would expect from a cast that includes Stephen Graham, Jason Flemyng, and Ray Panthaki, and includes a film stealing performance from Vinette Robinson (at around the 50 minute mark she has a tirade-level rant at an inexperienced manager and I stood and applauded in my own living room) and all the small stories and sub plots within the framework of the bigger picture are executed well. Overall, it is a fine film from top to bottom and I am glad to see it is getting worthy reviews and a lot of positive buzz. 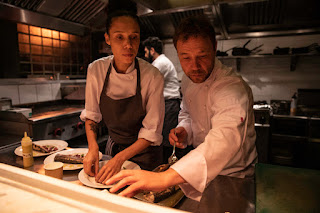 However, I can’t really write a film review about a chef and his work issues and crumbling personal life without risking some kind of emotion. It is a job I did, with relative success, for nearly two decades. It is a thankless task to try and create edible art when you’re surrounded by people who don’t have a clue what they’re doing (most restaurant managers have more than a little knowledge of food preparation but act like they know everything), and the battle between kitchen, front of house, and an illiterate customer base is a real war. Lots of films try and get it right, most fail because, at some point, part of the process gets glorified, or the head chef overcomes his personal battles and, in recovery, becomes a pleasure to work with, but with Boiling Point I had war level flashbacks. The accuracy of every detail, of every single characterisation, from the EHO power-mad inspector, to the loud and obnoxious ‘don’t you know who I am’ crowd, to the unreliability and various levels of skill and personality within the kitchen brigade itself, was just astonishing. I can only guess that filmmaker Philip Barantini worked in the trade for a while or, if he didn’t, he must have followed me around for 20 years with a notebook because I lived Boiling Point, I escaped Boiling Point and yet here I am with a sweat on, breathing into a paper bag calling for my mummy because, damn, this film is very real.

Boiling Point will get deserved plaudits from critics and audiences alike and, of course, Stephen Graham is a national treasure and the camera work is sublime and I agree with everything that an audience is coming out of this film saying, I really do. But what I hope for most, is that everyone who watches a screening of Boiling Point checks their own behaviours before entering a restaurant because some of you are nasty people, some of you are just plain dumb, and all of you just got put on screen in my film of the year.
Follow Steve on Twitter @STBwrites
Image - LFF
Email ThisBlogThis!Share to TwitterShare to Facebook