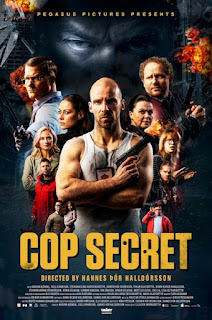 With the film getting its UK premiere at London Film Festival this week, Steve Taylor-Bryant watched Cop Secret...

I love festival season: At no other point in my year do I get asked if I want to watch an Icelandic police genre spoof directed by the Iceland Football team's goalkeeper Hannes Þór Halldórsson and of course the answer is a resounding Yes! Who would not want to spend an hour and half watching a foreign language Hot Fuzz? Except just calling it a foreign Hot Fuzz is a massive disservice as Cop Secret is most definitely a spoof in the vein of Hot Fuzz but, instead of moving a city police film to a small village, Cop Secret keeps the city aesthetic and asks the question ‘what would Bad Boys be like if it was set in Iceland?’

Auðunn Blöndal as Bússi is the tough guy cop, the Bruce Willis complete with white vest, who drives around recklessly in his American 80’s sports car causing thousands of dollars’ worth of damage, shooting before asking questions and endangering the lives of all around him, Reykjavík’s best cop, a drunk who doesn’t follow orders, and is most certainly struggling with his sexuality. Across the tracks in the richer side of town is a cop every part as talented as Bússi but he is wealthy, is clean, wears expensive suits and drives modern European sports cars in hot pursuit and is not at all confused about who he is and that is Egill Einarsson as Hörður, ex-male model turned police officer extraordinaire. When banks are broken into, but no money is stolen, the two rivals must form a partnership to work out who is behind the phantom robberies, and why nothing is being taken as the whole of Iceland prepares for the Icelandic Women’s football teams’ game with their English rivals for a place in the World Cup.

There is cliché upon cliché scattered throughout Cop Secret and on more than one occasion there are blatant nods to Bad Boys and the like, from the plane flying over the airport sign to the soundtrack. But, whilst this film is an incredible spoof full of talented witticism and some deft comedic moments, it is also a cracking action thriller in its own right. The actual plot behind the robberies is complex and cleverly thought out and the ex-model and friend of Hörður turned gang boss, Björn Hlynur Haraldsson as Rikki Ferrari, element is so well played that comedy and straight moments sort of intertwine and become one. The character of Rikki almost steals the show from a dynamic double act, but it’s the personal interactions between Bússi and Hörður though, especially during action scenes, that just edge it for me.

Hannes Þór Halldórsson may well be more famous for playing football than for making movies, and I may have been tempted into Cop Secret because I wrongly assumed this was a gimmick piece, but Cop Secret shows some real moments of skill in both visuals and cinematic action. It uses great locations, and is a steady piece of writing, well cast with a fine balance to the humour and I will look forward to seeing more from a filmmaker that I can say with all authority is certainly not a gimmick. Cop Secret is debuting at London Film Festival but if it gets any kind of release in the UK you could do a lot worse than check it out for yourselves, I had a blast.
Follow Steve on Twitter @STBWrites
Image - Pegasus Films
Email ThisBlogThis!Share to TwitterShare to Facebook