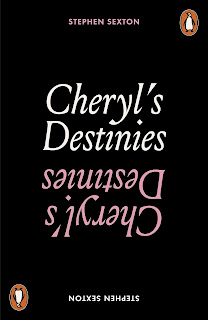 Tony Cross is reading all the books and poems shortlisted for this year's Forward Prizes for Poetry. Here are his thoughts on Cheryl's Destinies by Stephen Sexton...

Cheryl's Destinies is Stephen Sexton's second poetry collection. It is divided into three parts and linked by Cheryl, who is a tarot reading figure that pops up here and there throughout the collection. I think her role is to show us how we adapt to time by building pictures of the future.

Again, like Holly Pester’s “Comic Timing” this was not always an easy read. Sexton plays with language too, but perhaps not to the same degree as Pester. The main theme of the collection is time and the fluidity of time. The interconnectedness of past, present, and future. It also seems to be a lot about death, imagination, and memory. There are several ‘in memoriam’ poems throughout (and I’ll talk about one in more detail a little later.)*

The middle section, Siamese Dream for the Cloths of Heaven, is an ongoing discussion about the nature of their arts between Billy Corgan of The Smashing Pumpkins and W.B. Yeats. It takes its seed from a real-life experience where W.B. Yeats, through his wife Georgie Hyde-Lees, got involved with automatic writing. Sexton drops in Smashing Pumpkins lyrics. It's the sort of thing that in the wrong hands could fall apart but it is my favourite part of the collection. Well, except for the final long poem, "So it is, i.m Ciaran Carson".

Ciaran Carson, like Stephen Sexton, was a Belfast poet and the poem is both a remembrance of Carson and Belfast itself. There's a real feeling of the joy of words and phrases in that final poem. I'd love to hear it read out loud. But that's something I feel about all poetry. I read it aloud myself to enjoy the sound, but it was missing the accent of its own writer. When I've written this review I'm going to dip into the internet and see if I can find an audio/video of Stephen Sexton.

There’s also, like in Alice Hiller’s “bird of winter,” a poem created out of another text. In this case it is From The Beasley Contract Bridge System, 1935, which sculpts out a whole new creation from Lt-Col H.M. Beasley’s original book. Turning instructions on playing Bridge into something entirely new. It’s an interesting exercise. This isn’t as topographically interesting as Alice Hiller’s book, nor as difficult as Holly Pester’s. That’s not meant to say it is better or worse than either of them. It’s just that it is different to them and those are my most recent poetic references.

However, I get the impression that Sexton is, to paraphrase a well-known quote, aspiring to the condition of music and that way music interacts with time is the way poetry does. That poetry and music are the same thing except poets use words as their instrument. After all what are words but sound solidified?

Anyway, on that potentially pretentious note I should say that I enjoyed this collection. It's clever, intelligent and a linguistic joy.

* Such an amateurish touch this. One day I will learn to write proper.
Follow Tony on Twitter @Lokster71
About The Forward Prizes

The Forward Prizes are a celebration for those who love contemporary poetry, in association with the Forward Arts Foundation. The winners of this year's prizes will be announced at a ceremony on 24th October. Here are the shortlists:

The 2021 Forward Prize for Best Collection