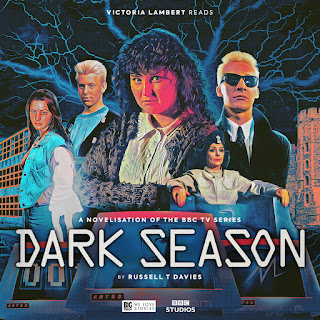 Thirty years since Dark Season debuted on BBC television, a brand new audiobook adaptation of the classic children’s sci-fi adventures series is available to own (as a limited edition CD box set or download).

Although it ran for only six episodes, Dark Season put Russell T Davies’s career on the tracks. Following the tradition of children’s television at the time, Davies also novelised Dark Season, and now it has been brought to life on audio by Big Finish.

Narrated by Victoria Lambert, in her first acting role since she originally played Marcie on screen, this special release is produced and directed by Scott Handcock.
An ordinary day at school takes a sinister turn when the mysterious Mr Eldritch promises a free home computer for every pupil — computers which conceal a terrible power…

Only three teenagers, Marcie, Thomas and Reet, are alert to danger. Soon, they’re caught in a conspiracy of brainwashing, kidnaps and a threat to the whole human race. Worse still, the school itself hides ancient secrets buried beneath its foundations, as the awesome Behemoth rises from its tomb, intent upon the destruction of all.

Eldritch has summoned his Dark Season, which heralds the end of the world…

Producer Scott Handcock said: “I was seven years old when Dark Season aired so I was just the right age to see it on first transmission. It was in the slot for slightly older children and, at my young age, it felt quite edgy and, well, dark.

“Considering it wasn’t just Russell’s first TV drama credit but also his first prose work, the novelisation is a thumping good book in its own right! Dark Season is very much a story of sinister technology and how it can creep into our world and sometimes ultimately threaten it.

“It’s quite prescient in a lot of respects: a celebration of computing but also a wariness of where that might lead. On the surface it’s an adventure about three children, who are sort of outsiders, saving the world against an impossible villain. But there’s a greater story about good versus evil, heaven versus hell and it’s all written with Russell’s typical heart and wit.

“It’s a brilliant series – mostly because it doesn’t talk down to children and touches upon more grown-up themes. It’s been great to revisit it and bring the original story to life in the audiobook format.”

Dark Season is now available to own as a strictly limited edition 5-CD box set at £22.99 or as a digital download at £19.99, exclusively at www.bigfinish.com.

Please note the CD box set edition is strictly limited to 1,000 copies only.