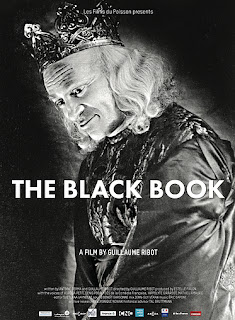 The Black Book was a compilation of accounts of the fate of the Jews in Russia during the Nazi occupation. It collected first hand accounts and parts of it were used in the Nuremberg Trials as evidence. Yet it was never accepted for publication in the USSR. Indeed, it wasn’t published in Russia until 2010. 2010!

The film is also the story of two murderous ideologies: Nazism and Stalinism. It is the story of how the Jews of Russia were never safe under either. It is the story of how a thing that appears to be useful during war time becomes a threat to the story one wants to tell when the war is over. The Black Book made the Jews too ‘important’. It made the role of collaborators in the occupied territories of the USSR to obvious. It wasn’t just the Germans who did this stuff. It was Ukrainians, Russians, Belarussians, Latvians, Lithuanians, and Estonians. That was political incorrectness post-War.

It is also the story of the Jewish Anti-Fascist Council, formed at Stalin’s order during the war. It is the story of three people involved in that council, the actor Solomon Mikhoels; and the writers Ilya Ehrenberg and Vasily Grossman. Another useful tool during war time, to the extent that Stalin let Ehrenberg and others visit the USA, at Einstein’s suggestion, to raise money. After the war was over and Israel was formed in 1948 it became the object of Stalin’s paranoid anti-Semitism. There were stories of the Jews wanting to found their own independent republic in the Crimea, which would be a base for the Americans on the Black Sea.

“…disguised as anti-Zionism Stalin’s anti-Semitism continued to grow.” (If that sentence doesn’t have contemporary echoes.)

Thirteen members of the Jewish Anti-Fascist Council were murdered after being tortured into false confessions on the 12th of August 1948. Solomon Mikhoels died in 1948 whilst in Minsk. It was an “accident”, spelled “assassination”. Ehrenberg became something of a stooge for Stalin, eventually dying of old age in 1967; and Grossman lived until 1964 but none of his books were published in the USSR. Grossman is probably the best known of the three outside the USSR because “Life and Fate” is such a well-known book.

But I’m telling the story not reviewing the film. It is brilliantly put together by director Guillaume Ribot. The story is told effectively as we experience the war in Russia – with some incredibly hard to watch footage. The stories of the Jewish Anti-Fascist Council and of Mikhoels, Ehrenberg and Grossman are weaved in and out of the larger story of war and dictatorship. The differing fates of the three men is interesting.

One thing this film does make you think about is how Stalinism is still a thing. That not enough people think of him in the same way as Hitler and the Nazis. As Stalin’s anti-Semitic paranoia grows after the foundation of the state of Israel in 1948 there’s a tendency to wonder if, had Stalin lived, that the Jewish Doctor’s Trial of 1953 might have been the beginning of a second Holocaust. Maybe without the industrial scale of Nazi Germany but with deaths coming from pogroms and gulags. There wouldn’t have been death camps as such but there would have been large scale work camps. But that’s a what if? Thankfully it was never put to the test.

I can’t recommend this film enough. The story of the Russian part of World War Two isn’t told enough in the West I think, and this film has lots of footage shot in Russia that isn’t overly familiar and the story of the post-War Stalinist anti-Semitic campaign is also worth telling and both are tied into the fate of The Black Book.

I made notes of several quotes from the film because they stuck with me. I’ll end with two of them both from Grossman:

“Will we find the strength to think about the last moments of those tortured and gassed…No, we can’t imagine what went on in the gas chambers.”

“…there are only graves and death…” describing Kyiv.

At a time of remembrance there are things that we should remember more than just those things that impacted us. Especially when people tell us that these things never happened.