Documentary - Salt in My Soul 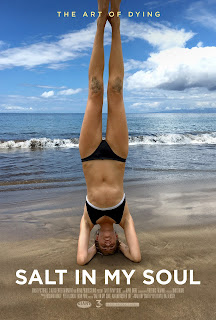 "Mallory Smith was diagnosed with cystic fibrosis at the age of three. In her twenty five-year battle with the deadly disease, she carved out a life that most of us don’t come close to." Watch the trailer for Salt in My Soul...

Based on the bestselling posthumously published memoir of the same name [see below for the book's detail - Ed], Salt in My Soul is a documentary and classic coming of age story about a young woman figuring out how to live while dying. Mallory Smith was diagnosed with cystic fibrosis at the age of three. In her twenty five-year battle with the deadly disease, she carved out a life that most of us don’t come close to. Using Mallory’s posthumously published 25,000-page secret diaries, hundreds of hours of newly discovered footage, and audio recordings, the film offers Mallory as the narrator of her own extraordinary chronicle.

Following her realization at age nine that she would die young, Mallory secretly began to record her inner thoughts in her diary while throwing herself at life: friendships in elementary school, lovers and sports teams in high school, the little travel her disease would allow. She attended college and explored the wider world, one that was just beyond her grasp. She became a devoted environmentalist, seeing a startling and vivid metaphor for her declining health in the destruction of our world. Her father feverishly researched treatment options, desperate that the death sentence be commuted. Her mother obsessively helped her to live, cooking to maintain her weight and create community, raising money for research, and teaching her to prioritize relationships over all else. Mallory fought. And she wrote; about her fears, her loves, her pain, her depression, her hopes, and gave a voice to the many millions who struggle with invisible or visible illness. In Mallory’s final days, her father uncovered a long-forgotten treatment that is now changing the world of medicine. Heartbreakingly, it came too late to save his daughter.

Mallory was a young woman who lived with illness her whole life, who suffered immeasurably but who always found the will to live happy. Her story is a testament to enduring parental love and determination and the healing power of memoir as medicine, inspiring all of us to live life as fully as possible in the face of the challenges we all face.

Documentary maker, Will Battersby has been producing documentaries and features for 15 years. His first documentary as producer, Trumbo, won the National Board of Review Freedom of Speech award. The film, about blacklisted Hollywood screenwriter Dalton Trumbo, was released by Samuel Goldwyn Films and had its premiere at the Toronto International Film Festival.

Salt in My Soul is Will’s second documentary as director. The first, The Canal, will be released by Showtime which is currently adapting it into a limited series. Will is producing alongside Patricia Arquette, who will also direct. The Canal is the first feature documentary about the environmental tragedy in the Love Canal neighbourhood of Niagara Falls and the extraordinary group of working-class women who fought to save their families.

SALT IN MY SOUL gets a VOD Release on January 25th thanks to Giant Pictures.

Salt in My Soul: An Unfinished Life, by Mallory Smith, is a powerful, intimate, and inspiring portrait of a brave young woman living with chronic illness. Mallory understood that patient voices need to be amplified in order to improve healthcare, that the intersection of human behaviour and nature is critical to environmental sustainability, and that love and friendship give life meaning. As Mallory’s body deteriorated, she sharpened her mind, crystalized her thinking, and honed her writing skills. In her 2500 pages of private journal entries, she created poetry out of prosaic experiences. Beautifully written, provocative, and peppered with insights, Salt in My Soul reminds us to follow Mallory's mantra and "Live Happy."

For more information about the book Salt in My Soul: An Unfinished Life please go to: https://www.penguinrandomhouse.com/books/607965/salt-in-my-soul-by-mallory-smith/
Email ThisBlogThis!Share to TwitterShare to Facebook