Film - A Starry Sky Above the Roman Ghetto 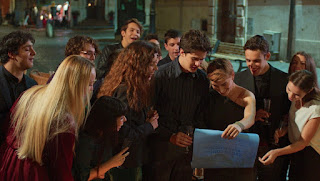 Tony Cross watched A Starry Sky Above the Roman Ghetto at the UK Jewish Film Festival...

I’m going to confess from the beginning – and starting a review with I is very self-indulgent – I am not sure how I feel about this film. I was drawn into the story, and I was reduced to tears by one sequence that I can’t talk about without spoiling the whole thing but there was something about this that I couldn’t quite get comfortable with.

Perhaps writing this will help me work out what it is.

The film begins in Rome on the day the Germans came and took away the Jews in the Roman ghetto. We follow a family who are hidden in a Convent, then we focus on one young Nun and a small child, whose name we will learn is Sarah. The Germans burst into the convent rounding up everyone but one Nun, Sister Lucia, hides Sarah whilst horrible things happen.

Then we find ourselves in a car in 2021 with Sofia (Bianca Panconi) who is arguing with her mother. Sofia, the daughter of a famous classical pianist, discovers a letter hidden in an old suitcase in her attic dating from just after the war. It is written to Sarah and includes her picture.

Sofia decides to see if she can find Sarah and, basically, rounds up a posse of students from her school and a Jewish school.

They find the Convent and Sister Lucia (Lucia Zotti) and it turns out that Sarah was adopted by an Italian couple. We also find out that Sister Lucia, before she was a Nun, fell in love with and was made pregnant by a young Jewish man. Her father, though, was a fascist and when he found out beat her up. She lost the baby and was forced into a Convent.

Sofia decides to tell Sarah and Sister Lucia’s story and the group start making a play, which lots of parents don’t approve of. Sofia keeps pushing everyone along. She’s determined to get to the bottom of it.

Perhaps it is that there is something a little glib about this story. That none of the obstacles seem hard enough. That Sofia seems too good to be true.

It’s not the performances, which are excellent. Bianca Panconi has the chops to lead a film and the supporting cast are also pretty good. I was particularly impressed with Lucia Zotti as Sister Lucia, Aurora Cancian as Sofia’s Nonna and Irene Vetere as Lea. But…

The story just seems too good to be true. If that makes sense. Is it me? Perhaps it is. It is weird to have – basically – enjoyed something but still feel a vague unsettled unrightness about the whole thing.

The solution, of course, is to watch it yourself. I might be overthinking it.

And that is my review.

No help at all.

The UK Jewish Film Festival 2021 takes place from Thursday 4th November – Thursday 18th November 2021, in cinemas and online. Find out more and how to watch A Starry Sky Above the Roman Ghetto here.