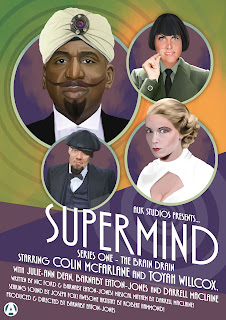 AUK Studios has announced the release of the first of its fully-produced ‘in house’ audio dramas, created by Barnaby Eaton-Jones. Listen to the trailer for series 1 of Supermind: The Brain Drain...

In this first series of the comic melodrama, styled after classic American radio serials, Supermind rescues heiress Anastasia Del Ray from a kidnapping attempt. In return, she declares her intent to produce a movie based on Supermind’s life –starring herself as him!

Meanwhile, Professor Fenella Vaytell develops a weapon to hijack the entire country’s minds as part of her Nazi paymasters’ nefarious scheme to control the USA!

Will Supermind’s prestigious powers save the day? Will Lady Witcombe profit off his powers once more? Will Frampton faint at the sight of fisticuffs? Will Vaytell enslave the entirety of America?

Find out the answers in: The Brain Drain!

Writing on social media about the new release, Barnaby said "I came up with the idea of SUPERMIND as a live radio show in theatres and it was in active development for an unveiling when the pandemic pooped on those plans. As it was supposed to be a radio show, I thought I'd better actually make it one. Ahem. The gloriously supportive AUK Studios / AUK Global Digital Distribution liked the idea and let me go a little silly with it.
"The talent involved, from co-writer Nic Ford, sound designer Joseph Fox, artist Rob Hammond, composer/actor Darrell Maclaine, legendary voice artist Julie-Ann Dean, to our amazing co-leads in TOYAH WILLCOX and COLIN McFARLANE, is just top-notch. And, even more excitingly, Series Two has been commissioned.
"Take a trip back to 1930's New York and listen to the antics of Art Hardwicke (aka Supermind), his manager Lady Witcombe, and his manservant Frampton, as they fight off the emerging Third Reich.
"It's big, it's melodramatic, it's like American radio *used* to be (with company sponsorship too!)"

Directed and produced by BARNABY EATON-JONES from a script he co-wrote with NIC FORD,  Supermind stars film and TV actor COLIN McFARLANE and iconic musician and actress TOYAH WILLCOX, alongside BARNABY EATON-JONES, JULIE-ANN DEAN and DARRELL MACLAINE.
Find out more in this half-hour long interview with the cast.
All ten 15-minute long episodes of Supermind series one are now available on Audible – https://adbl.co/3H3EsME, Apple Books – https://apple.co/3F29Bhw and Storytel – https://bit.ly/3H5tfv6.
Image - AUK Studios
Email ThisBlogThis!Share to TwitterShare to Facebook