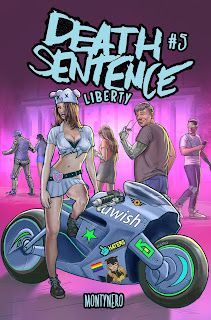 That's over 430 pages of story featuring some of the best artists in modern comics.

Each book is a complete story charting the final six months of bisexual artist Verity and musician Weasel in the face of a fatal STD pandemic. If you value dramatic storytelling with an intriguingly dark concept and characters then Death Sentence is the series for you. 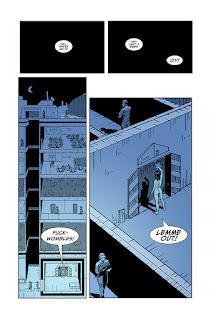 Here's a reminder of a short Q&A with series co-creator and writer Monty Nero about the Death Sentence series, ahead of yesterday's new Kickstarter launch.

So Monty, what's the new Death Sentence story about?

Death Sentence Liberty sees Verity captured by the Americans, battling the architect of the virus, and facing some tough revelations about her true nature. She's newly pregnant, too, so her stress levels when she's in danger are through the roof.


Death Sentence is about a global viral pandemic, so has COVID informed the books?

Well, it's spooky how much of the COVID response is already in the books. It was well researched, but I thought I'd exaggerated the government incompetence and public reaction to the virus to make it more dramatic. So there are lockdowns, military police, public rioting and rebellion. It turns out my 'exaggeration' actually fell short of just how bad human behavior can be. The book is darkly satirical but it turned out I didn't go far enough.


So has that changed the story going forward?

Yes, but it's not all bad. For instance, it was inspiring just how many ordinary people helped each other out during COVID, practically and emotionally, often complete strangers or neighbors. And the scientific response, companies working together to find a cure for free, was surprising. So you have to reflect that too. I think the main thing is, because everyone is so cognisant now of what a viral pandemic feels like, we have to be even more rigorous in the detail to keep it real. It's gone from less of a sci-fi concept to a realistic situation.


Has COVID improved the prospect of a movie and TV adaptation?

Yes, we've always had interest from big companies, but it's been a matter of finding filmmakers with the right background and approach. We've got a great pilot screenplay and series arc and, happily, I've met a few good directors and producers lately who seem to genuinely get it. They've made hit series before, things I admired and enjoyed watching before we started talking, so for the first time I feel happy with where it's heading. But making the comic is always my personal priority. 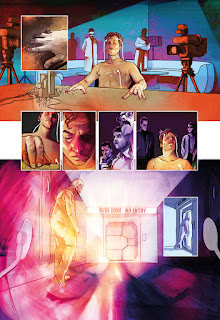 So there'll be more Death Sentence books after this?

Absolutely. I had a meeting with Titan about this recently. We're about halfway through the overarching story, unpeeling the conspiracy, so there are three more graphic novels firmly mapped out. Two focused on Verity, and one with Weasel. The latter one is a black comedy. We've had truly great artists with Mike Dowling and Martin Simmonds, so we'll have to find someone special to draw those. After that, we'll have to see. I'm keen to try some different genres, but I also have tons of ideas for other Death Sentence characters.


What's in the Kickstarter itself?

Three different graphic novel stories, Death Sentence, London, and Liberty. Then there's different KS exclusive cover options, a goth cover, a cyberpunk cover, and a sexy Ben Willsher cover. Apart from that, I want to keep it simple. With all the supply chain issues in the last year, I've held this campaign back so we can definitely ship it to people within four months of the campaign ending. Everything's finished save for five pages, ahead of launch, and we print and ship from both the UK and US. So shipping and printing swiftly is the priority.


Thanks, Monty. Good luck with the series.

You can support the new Death Sentence Kickstarter, featuring all three of the Death Sentence books, right here
Email ThisBlogThis!Share to TwitterShare to Facebook