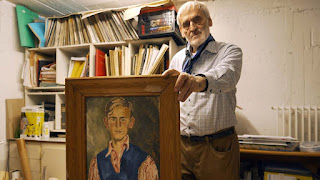 Directed by Wiebke Pöpel, Helmut Lachenmann – My Way is a biographical documentary of German composer Helmut Lachenmann. The film follows Lachenmann, and we listen to him talk about his life, his music and watch him at work. There are a several sequences with him watching orchestras rehearsing, which I found fascinating. I’m always a fan of looking behind the curtain.

Lachenmann is probably described as ‘avant-garde’. His music, which we hear a decent amount of during the film, is not your bog-standard orchestral sound. Instruments are played strangely, there are none instrumental sounds and the occasional glimpses of what I suppose I think of as ‘music’. Lachenmann though makes a good point that we don’t really listen to music because we have become so used to it. We let it become background noise. Lachenmann tries not to do that. Sir Simon Rattle, amusingly, notes that when he was younger, Lachenmann was the sort of music that the British didn’t think should darken their concert halls.

The documentary goes back through his life, and we see how he developed as an artist. Interestingly at one point he says, “I had to go poaching among all other possibilities first” before arriving at where he is now. But even that doesn’t satisfy him. He doesn’t want his “style” to become a prison. He wants to keep developing.

He is 84 (and a sprightly 84) when this film was made, and he drives home the need to keep moving and learning and thinking. You can only achieve a fraction of what you want to do so do everything you can.

There’s a lesson for everyone in this film, but if you’re an artist then you should seek it out. I have said in other reviews that there is a difference between how Europeans talk about the arts and how the British do. The British don’t take things too seriously. If you look like you are then you’re a pretentious sort. Lachenmann would, I think, appeal to the British palate. He’s focused on the importance of his work, but he is also fun to listen to. He seems to have a sense of humour about himself and his work without losing sight of its importance.

When he talks about learning with Luigi Nono – on whom, if memory serves, Clive James has some scathing things to say – you get the impression that Lachenmann took things a little less seriously. Nono was always talking about “getting away from the Bourgeois” and seems to have carried all that heavy seriousness of a Marxist on an artist mission. You get the impression Lachenmann is more playful than that.

He’s still working too. Still composing, still attending rehearsals (whilst he can he says), still travelling and still trying to escape – or avoid – his self-built prison.

I really enjoyed it. I was never bored, and I liked his view of art. There are a handful of talking heads but mostly it is Lachenmann’s voice we hear. Either from now or from old interviews, which makes it more fun.

I’m going to give his music a go now, because in the modern world I can do that. Lachenmann has, in the words of his friend Luigi Nono given us “an invitation to truly listen.”