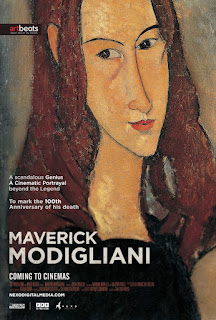 Our own maverick Tony Cross watched the documentary Maverick Modigliani at the UK Jewish Film Festival...

This documentary, directed by Valeria Parisi, tells the story of Modigliani, the artist. It takes an interesting route through his life though. It is partly a standard talking heads documentary. We hear art historians, writers, forgers (ex-forgers) and others talk about his life and work. We hear about his influences and his influences on others. Yet, overshadowing this is that the voiceover is the ghost of Jeanne Hébuterne (voiced by Maria Magdalena Hoer) his last lover and mother of one of his children. Not the literal ghost obviously, but that is the voice we hear, and she talks about his past, present and the future (from their point of view.)

Indeed, Modigliani is a bit of an artist cliché. He was a drinker, a drug addict, a womaniser, and he died an early death, aged just 35 on the 24th January 1920. And then, of course, his art began to sell at ever increasing prices. Until one was sold in 2018 for $157m. He was buried in Père Lachaise Cemetery after a sumptuous funeral paid for by all his friends. Two days later Jeanne Hébuterne threw herself out of the fifth-floor window of her parent’s house killing herself and her unborn baby.

This is the story that is intertwined through the story.

But Parisi picks two other women who Modigliani had affairs with. The first is Russian poet Anna Akhmatova, although when they met, she wasn’t then Akhmatova. The film never entirely commits to whether they were lovers or not. The other was Beatrice Hastings, a British writer and feminist who was living in Paris writing for The New Age magazine. They were in a relationship for two years and Modigliani painted her many times. Indeed, one of the things I thought that someone needs to write Beatrice Hastings story. Her life too ended in suicide. 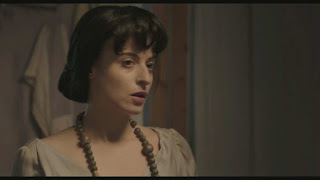 These three women’s stories, with Jeanne Hébuterne’s voiceover, are as key to this documentary and the telling of Modigliani’s story. Each women gets a short dramatized – almost cosplay – appearance, although Jeanne Hébuterne is – I think – the first person we see. It makes for an interesting structure.
We also get to hear of Modigliani’s relationships with places: his hometown Livorno and Paris and his interactions with other artists. It gives you a real feeling of art as a movement. Jeanne Hébuterne was an artist herself and we see some of her paintings in the film. It talks about his Jewishness a little. Interestingly Livorno was a very Jewish friendly city and he left there just in time to arrive in Paris at post-Dreyfus most anti-Semitic. This isn’t dwelt on in detail, but it is part of the picture of his whole life.

So, a thumbs up from me. The structure was interesting (and I’d love to talk to the director about why she made that choice) but it passes the key rules of a good documentary for me.
Follow Tony on Twitter @Lokster71