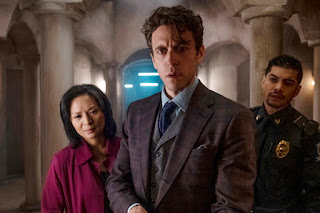 Sky has confirmed that the TV series adaptation of Dan Brown's hit novel The Lost Symbol is coming to Sky Max and Now next week. Watch the teaser trailer...

Professor Robert Langdon's friend and mentor, Peter Solomon, director of the Smithsonian, has been kidnapped. At the demand of Peter's mysterious abductor, Mal'Akh, to save his missing friend Langdon must to go on an esoteric journey to find an ancient portal. Peter's daughter Katherine, who also happens to be Langdon's ex, joins him on the quest.

Based on Dan Brown’s international bestselling thriller “The Lost Symbol”, the 10-part drama series stars Ashley Zukerman as Robert Langdon, the role made famous by Tom Hanks in the Hollywood films. The series also stars Eddie Izzard as Peter Solomon, Beau Knapp as Mal'akh, Sumalee Montano as Agent Sato, Rick Gonzalez as Nunez and Valorie Curry as Katherine Solomon. It is Written and Executive Produced by Dan Dworkin and Jay Beattie with Dan Trachtenberg as the Director/Executive Producer of the pilot episode.

The Lost Symbol can be found on Sky Max and NOW from 18th November.