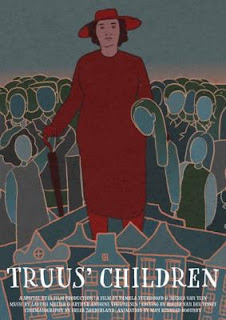 Truus’ Children is the story of Truus Wijsmuller, a Dutch woman who helped organise the Kindertransport, which between December 2, 1938 and My 14, 1940 enabled the evacuation of c.10,000 Jewish children from Germany to the United Kingdom. The story of the Kindertransport is reasonably well-known, but Truus Wijsmuller’s name is not. This film is partly an attempt to rectify this.

It is the story of how one person can make a difference. It is also a story about how few of us are willing to stand-up when called upon. I was reminded of words from Tishani Doshi’s poetry collection, “A God at the Door”:

"...In every
republic there will be some who walk down to
the water with life vests and bread, while others
lead soldiers to trapdoors in the cellar..."

Truus Wijsmuller would have walked down to the water with life vests and bread. She spoke to Eichmann directly to get approval for the 10,000. She got things done. The film illustrates this with events after the war as well as during the war. Truus was the sort of woman you sent to get things done. She wasn’t afraid to demand things. On the day the Germans invaded the Netherlands she was in Paris. On her way back to the Netherlands she organised buses to evacuate dozens of children to England. Pushing them through checkpoints and crowds and on to a ship and then to England.

The film tells her story and the story of the events she was involved in through the voices of Truus herself, friends she knew after the war and the children themselves. It is these witnesses who tell their stories calmly, even as they talk of Kristallnacht and lost parents. It seems impossible that there are people out there that deny the Holocaust.

Directors Pamela Sturhoofd and Jessica van Tijn weave voices and events together in a fascinating way and they also are making a point about the modern world. As a caption at the end of the film says, there are 25.6m refugees in the world now, about half of them are under 18 and the question the film seems to pose is what will you do? As we listen to a British Home Secretary, Priti Patel, basically advocating murder – or if you want to be polite – manslaughter to stop refugees reaching England from the channel. We don’t call it murder, of course. The polite language of administrative murder is always elided by euphemism.

It might seem melodramatic, but we are reaching the point where you must ask yourself where you stand on these issues and what you are willing to do. Truus Wijsmuller’s story is amazing, but three quarters of Dutch Jews were murdered during the Holocaust. The highest percentage of any Western country. Too many people were afraid to act or chose not to act. Now, it is easy to judge this from 2021 and from a country that was lucky enough that it never had to have its morality tested by invasion and occupation.*

Lord Dubs is one of the people interviewed here. It was Lord Dubs who introduced the Dubs Amendment to admit unaccompanied minors from refugee camps into the UK. It has resolutely been ignored or opposed by the government. But when you watch this documentary you find yourself thinking that we have not done enough and are not doing enough to protect child refugees. Whilst those fleeing aren’t necessarily fleeing enemies as obvious as the Nazis, they are fleeing other terrible enemies and places.

That is why you should watch this. It is why someone should sit Priti Patel in a room with a copy of this film and not let her out until she’s watched it all the way through and answered some questions. A woman who own parents left Uganda to find a safer place to live in the United Kingdom. I suspect if that can’t generate empathy then I suspect this film might not be able to do it either. But it might do for you.

It is a film worth watching and a film worth thinking about. It is also a film that should make you start to ask yourself what kind of person you want to be.


*As an aside this also made me think about trains. We in Britain have a fond recollection of the age of steam and trains but our trains were never converted into transports for political prisoners or transport for innocent victims to their deaths. We never needed them to flee from occupation or invasion. The British experience has, I think, made us emotionally stunted as a nation. We stand as if we are morally unimpeachable because we were never invaded, but that doesn’t make us superior it makes us untested. And recent events don’t make me optimistic about the moral superiority of the British character.