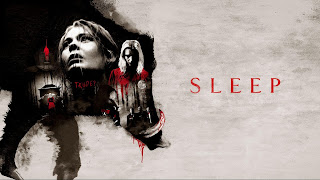 Michael Venus’ impressive debut feature, Sleep, is an intriguing and challenging tale that constantly feels as if it is sliding just out of reach, much like the elements of a dream.

Venus’ film reveals influences that range from the fairytales of the brothers Grimm to the Lynchian nightmares that lie just beneath the surface of the everyday world. It uses its imagery in psychologically unsettling ways and raises ghosts – more intimate ones of family trauma and those of a national past, while retaining its Germanic folklore qualities.

The film follows flight attendant Marlene (Sandra Huller) whose circadian rhythms are out of whack because of her work which takes her to different time zones. That’s her story anyway. What is actually disturbing her nights is the onslaught of terrible dreams, one of which leaves her screaming and gasping for breath. She secretly fills notebooks with vivid drawings and disjointed words from the dream images which she remembers.

Her devoted daughter Mona (Gro Swantje Kohlhof) insists on making an appointment for her to get professional help. Marlene acquiesces, but she tells her daughter that she must first take a flight to Istanbul which will take her away from home for a few days. This is a lie, instead Marlene heads to the Sonnenhugel Hotel in Stainbach, a small village situated in remote woodlands, which she has discovered is the place that has been haunting her dreams.

Marlene finds the hotel perplexingly familiar and recognizes the men in the pictures of the three founders which hang in the lobby. She also knows that they all committed suicide.

Once alone in her room Marlene becomes increasingly disturbed and frightened and cannot prevent the onset of a waking dream involving an enormous wild boar, which sends her into trauma-induced paralysis.

When daughter Mona gets a call from the hospital which is attending to her mother, she discovers her mother’s notebooks and travels to Stainbach herself. She checks into the same hotel and is welcomed by avuncular owner Otto (August Schmolzer) and his wary wife Lore (Marion Kracht).

It isn’t long before Mona begins to share the same dreams and visions that terrified and confused her mother, indicating that there is some kind of psychic bond between mother and daughter. Once in the hotel, the place of strongest subconscious connection, it allows Mona access to events in the past.

Between visits to her cataleptic mother in hospital Mona encourages proprietor Otto to show her around the out-of-season hotel and to expound on his plans for renovations which will bring the hotel to its full completion and fulfil the vision of the original founders, of whom he is the last.

His self-assured demeanor comes under question however, when we discover that his wife Lore is obliged to strap him down in his bed each night. Behind their jovial professional façade, the hotel owners have secrets. Otto has big ambitions, but Lore is silently unconvinced and uncomfortable. She is also desperate to reconnect with their estranged son Christoph (Max Hubacher) who is a ‘disappointment’ to his father.

Otto plans to make the hotel a centre for ‘traditional pursuits’ and ‘traditional values’ and is running for mayor of the local town in which he has cultivated acolytes by sheer force of his dominating personality. He arranges an evening reception at the hotel to introduce his campaign during which he makes a speech harking back to the past and outlining his plans ‘to make Germany great again’. Although it seems the younger generation have other ideas.

It seems that young Mona is made of sterner stuff than her mother, and despite her disconcerting psychic breaks, lost hours and gruesome visions, she continues to pursue answers until she can collect all the pieces of the puzzle which ties herself and her mother to the hotel and reveals why three of the original founders committed suicide.

Mona has stumbled into something where her visions are a threat. In the most traumatic of moments, she finally sees how one of the names in her mother’s scribbled notes ties everything together. The ethereal blonde woman that has been creeping around her consciousness is called Trude (Agata Buzek) and it is to her that all of the threads of the mystery connect.

Michael Venus’ Sleep is a wild fever dream centred in a real horror. Through a beautiful mix of abstract visuals and transitions which veer from dream to reality, Venus effectively manages to keep the viewer off-balance but still intrigued. It’s a masterful trick to pull off in a first feature. The line between reality and dreams becomes increasingly blurred until neither the participants nor the viewer can be absolutely sure what they are seeing is real.

The film also benefits by engaging performances from Kohlhof, Hüller and August Schmölzer, and Marius von Felbert's cinematography allows the pretty wooded hills and the neat, serviceable hotel to hold a quiet menace that seems ready to burst through normality.

Sleep may be seen as a film about multigenerational trauma - everyone in the present is burdened by the guilt of the past, but it also seems to indicate that it is predominantly women who must find the will and the courage to fight the sins of the father (and the fatherland).

With the rise of populism across the world Sleep is a challenging and timely examination of how quickly our history can overwhelm our present. It is a clever and stylish attempt to address issues that still remain upsetting for many Germans and for other countries too.

Sleep invites us to look directly at what lies uncomfortably in the unconscious, to address what may still ferment there and to deal rationally with it, before it is prodded into existence by those with selfish or malevolent intentions, who want it to again take physical form.