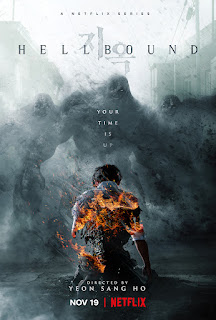 "I would like to welcome you all to the new world." A new Korean horror/thriller series from the director of Train to Busan heads to Netflix next week. Watch the trailer for Hellbound...

Press Release
Unbelievable demonstrations of hell take place in the middle of Seoul right in front of crowds. Mysterious beings condemn individuals to be hellbound, and otherworldly beings appear exactly at the specified time to kill the condemned in a brutal burning.
Rising above the utter chaos resulting from these inexplicable supernatural occurrences is the commanding voice of Jung Jinsu (Yoo Ah-in), the leader of an up-and-coming religious organization, The New Truth. He claims that only sinners are marked for condemnation and that these occurrences represent divine will to make humans righteous. A group of his followers with blind faith, the Arrowhead, take into their own hands the punishment of those who go against the divine will. The world becomes a living hell.
Min Hyejin (Kim Hyun-joo), a lawyer, challenges Chairman Jung by claiming the demonstrations of hell to be simply supernatural occurrences. She joins forces with the few who try to protect the hellbound and return the world to the realm of humans, not gods. They go up against the chaos instigated by The New Truth.
Directed by Yeon Sang-ho (Train to Busan, Peninsula) Hellbound hits Netflix on 19th November.
Image - Netflix
Watch Hellbound on Netflix
Email ThisBlogThis!Share to TwitterShare to Facebook