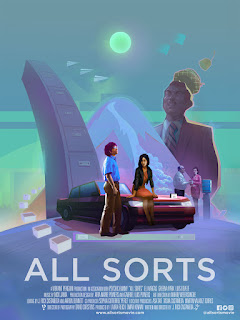 Surreal office comedy All Sorts is set to premiere at Raindance Film Festival this weekend...
Press Release
The film, by writer/director J. Rick Castañeda, will premiere with an in-person screening in London at the Curzon Hoxton cinema on November 6th, 2021 at 6:00pm and will be available to watch digitally in the UK from November 7th, 2021 to November 9th, 2021. The film is part of Raindance's BOOMERANG strand, which the festival created “in response to the challenging and often gloomy months we’ve just endured, [and] aims to turn the arthouse frown upside down by embracing the joy of indie film.”
All Sorts, a movie about a lonely data entry clerk who stumbles into the world of championship folder filing, is a quirky comedy about finding magic in everyday life. The main character, Diego (played by Eli Vargas of “Chavez”; “You, Me and Dupree”; “Arrested Development”; and “Burning Bodhi”), is desperate to find a job, excitement, and even love. New on the job at a strange company, Diego stumbles into an incredibly fast filer named June (played by Greena Park of “The Comedown” and “Family from Tang”), and the two journey through a wildly unexpected office adventure.

“When I got out of college and couldn’t find work in the film industry, I worked a lot of mundane office jobs,” Castañeda said, describing his inspiration behind the story he wrote 19 years ago. “I found lots of time to imagine magical escape routes out of the grey cubicles where I was trapped everyday. And one of these stories was about a competitive filer named June.”

“I was in a dark place when I had these ideas, and the purpose of them was to put a smile on my face. So I was happy to hear we were part of the Raindance ‘Boomerang’ series focusing on the joy of indie films,” Castañeda said. “This is a very positive movie about love, and friendship, and finding magic in a dim, drab place. The aim is to get people to look at their world in a different way.”

Castañeda’s hope is to bring a smile during these uncertain times.

Raindance Film Festival is the largest independent film festival in the UK attracting 16,000 visitors and 500 industry professionals to London. This year marks the 29th year of the festival, and a return to in-person screenings.
Find out more and book tickets for All Sorts here
Image - Vibrant Penguin
Email ThisBlogThis!Share to TwitterShare to Facebook