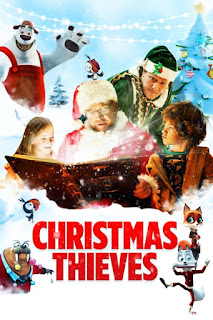 All we want for Christmas is... a festive fun film starring the wonderful Michael Madsen and Tom Arnold? Oh yes, watch the trailer for Christmas Thieves, thanks to The Movie Partnership...

Christmas Thieves follows Frank (Tom Arnold) and Vince (Michael Madsen), after a robbery goes wrong, they break into a home to avoid the cops when eight-year-old Liam and four-year-old Olivia mistake them for their babysitters. Hoping to make the children fall asleep so they can make their final getaway, Frank begins to read them stories from a magic book that he grabbed during the robbery, taking them to the enchanted world of ARCTIC FRIENDS. The two thieves have to endure the children's hijinks as they make various attempts - as absurd as they are disastrous - to escape.

Directed by Francesco Cinquemani, Christmas Thieves will be coming to all major digital download platforms from 29th November.