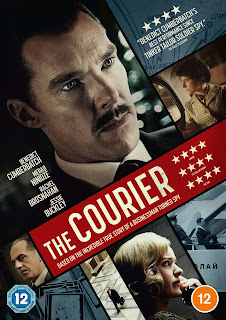 With the release of tense espionage thriller The Courier on digital download, Blu-ray and DVD, here's a look back at some of star Benedict Cumberbatch’s best war roles on film and TV...

From the battlefields of Medieval England to the darkest periods of the Cold War, Benedict Cumberbatch’s filmography explores some of the bloodiest conflicts in British history. With his performances earning multiple award nominations and high critical praise, no one is better at putting the audience through the wringer in these incredible tales of heroism and bravery.

The Courier, Cumberbatch’s latest foray into the cinema of global conflict, is based on the incredible true story of British businessman-turned-spy Greville Wynne, who he plays in the film. Picked for his unassuming nature and frequent-flyer miles, Londoner Wynne finds himself involved in a mission to de-escalate the Cuban Missile Crisis by passing top secret intelligence from the USSR to MI6 and the CIA, with the help of Soviet dissenter Oleg Penkovsky (Merab Ninidze). When their friendly working relationship comes under scrutiny from the KGB higher-ups, a dangerous net closes on both of them...

Adapted from the novel of the same name by beloved author Michael Morpurgo, Steven Spielberg’s heart-wrenching War Horse tells the story of an Irish Hunter horse called Joey. As the horse journeys across the battlefields of Europe the horrors of World War I are revealed through his encounters with both British and German Army soldiers. In his feature film debut, Jeremy Irvine led the cast as young Albert Narracot, Joey’s owner, with Peter Mullan, Emily Watson, Tom Hiddleston, Michael Caine and of course Benedict Cumberbatch packing out a cast, brimming with British acting talent. Cumberbatch will be remembered by viewers for his rousing speech as Major Stewart, who leads a cavalry charge against the enemy in Flanders where British forces are decimated and Joey falls into the hands of a German soldier. Although there can only be one Benedict Cumberbatch, Joey was portrayed by no fewer than fourteen different horses during the film shoot, with the production obtaining an ‘outstanding’ rating for the American Human Society for the care the animal actors received. A huge hit on its release netting six Oscar nominations, War Horse is a gripping, moving and timeless classic from one of modern cinema’s greatest storytellers.

Benedict was back in the fields of WWI for Parade’s End, the acclaimed BBC five-part miniseries based on Ford Madox Ford’s series of novels from the 1920s. Cumberbatch and Rebecca Hall play Christopher and Sylvia Tietjens. Christopher is a dour Tory statistician and his wife Sylvia, a self-centered and promiscuous party girl. The show follows their doomed relationship and love triangle with young suffragette, Valentine Wannop (Adelaide Clemens), through five riveting episodes as their lives and those of the people around them are torn apart by the war. While the stuck-up character of Christopher may initially seem cold, Cumberbatch’s excellent performance will have you fully involved in the gripping drama by episode five. Indeed, Cumberbatch has said that Christopher was one of the more commendable characters he has played, stating he ‘has many admirable qualities I'd like to siphon off into my life.’ Highly praised by critics, and receiving six BAFTA nominations including Best Actor for Cumberbatch, Parade’s End was one of the year’s unmissable television events with an outstanding Cumberbatch performance.

Fast forward in time to World War II for the incredible true story of Alan Turing and the codebreakers at Bletchley Park, as told in Morten Tyldum’s award-winning The Imitation Game. Starring Cumberbatch as Turing and based on Andrew Hodges’ biography Alan Turning: The Enigma, the film tells the story of the famed mathematician's efforts to create the Enigma code-breaking machines that would decrypt the Axis powers’ secret messages and help win the war for the Allies. Kiera Knightley and Matthew Goode offer support as Turing’s cryptanalyst colleagues, Joan Clark and Hugh Alexander, while Charles Dance and Rory Kinnear also appear. The film’s title is drawn from the ‘Turing Test’, published Turing’s 1950 essay ‘Computing Machinery and Intelligence’, in which Turing posed the question, could a computer convincingly imitate a human? The Imitation Game showcased another staggeringly committed performance from Cumberbatch, who was nominated for Best Actor at the Academy Awards, BAFTAs and the Golden Globes. Essential viewing.

Cumberbatch took a significant leap back in time, playing infamous English monarch Richard III in The Hollow Crown: The Wars of the Roses. This was the second part of the BBC’s six-film TV series based on William Shakespeare’s ‘Henriad’, covering the plays: Henry VI: Part 1, Henry VI: Part 2 and Richard III. The series covered the Wars of the Roses saga of British history, including the preceding political machinations and uprisings against Henry VI (Tom Sturridge), Richard taking the throne and eventually his death at The Battle of Bosworth Field. The series marked the first time Cumberbatch would work with acclaimed director of On Chesil Beach, Dominic Cooke and they would later re-team to tackle a much more modern crisis in The Courier. An excellent Shakespeare adaptation and another scene-stealing performance from Cumberbatch as one of Britain’s most loathed monarchs. My horse, my horse, my kingdom for a horse!

Finally, we head back to the trenches of WWI for Sam Mendes’ 1917, in which Cumberbatch has a brief but significant role as Lieutenant-Colonel Mackenzie. In the film George MacKay’s Lance Corporal Schofield is sent on a deadly mission across enemy lines, along with Lance Corporal Blake (Peaky Blinders’ Dean-Charles Chapman) to deliver an essential message to Mackenzie, that they must stop a scheduled attack on the German forces. British Army intelligence has received a message that the Germans have laid a trap and if the assault is to go ahead, all 1,600 soldiers will be killed. Before heading out on their mission they are informed by their superior officers that Mackenzie is not one to shy away from battle, and are told ‘make sure there are witnesses’ when they deliver the message. Following a gruelling ordeal, Schofield eventually makes it to Mackenzie’s dug-out, with Cumberbatch delivering a forbidding and determined performance as the battle-hardened Lieutenant-Colonel, who, just as troops are flooding ‘over-the-top’ into no-man’s land, calls off the attack. Using a series of very long takes that appear to be two continuous shots, Roger Deakin’s incredible cinematography puts the audience at the heart of this propulsive, thrilling and gripping WWI story. Unmissable.

The Courier is available on digital download, Blu-ray and DVD now from Lionsgate UK
Email ThisBlogThis!Share to TwitterShare to Facebook