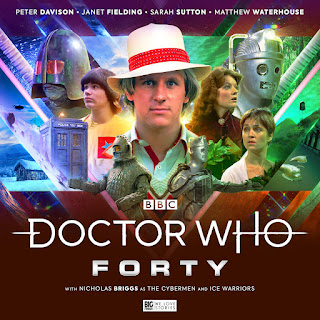 The story details have been revealed for the first of the two volumes, released in January 2022 to coincide with the anniversary of the broadcast of the first Fifth Doctor adventure Castrovalva. The opening episode of this box set, Secrets of Telos, is a direct sequel to the Doctor Who television episode Tomb of the Cybermen (1967), and the Fifth Doctor travels with companions Tegan (Janet Fielding), Nyssa (Sarah Sutton) and Adric (Matthew Waterhouse) across this pair of epic episodes.


Secrets of Telos by Matt Fitton

Professor Parry’s expedition to the tombs of Telos was hardly an unmitigated success. The handful of survivors limp home in a spaceship… unaware that the deadly peril they faced from the Cybermen is not yet banished.

Into this situation stumble the Fifth Doctor and his friends Nyssa and Tegan - and they’re soon in a deadly fight for their lives.

Except things aren’t quite that simple - something odd is happening to the Doctor. He’s suddenly in a different part of his own timeline inhabiting his future self with no idea of why or how this has happened.

Who is bouncing him through time? And what could they possibly want?


God of War by Sarah Grochala

The Doctor is still being jolted through his own timeline, and has now found himself with Nyssa, Tegan and Adric in ninth century Iceland near a Viking settlement on the edge of a volcano. A settlement whose leader has just found a god in the ice.

The TARDIS crew are soon in a battle with the fearsome Ice Warriors. There are a lot of lives to save… and not just those of their new friends.

The Doctor’s about to find that his biggest battle may be with his own conscience.


Producer David Richardson said: “Can it really be 40 years since Peter Davison stepped into his cricketing gear and brought a whole new zest and energy to Doctor Who? The anniversary of the arrival of the first young Doctor deserves to be celebrated, and the party lasts over two box sets. Why is the Fifth Doctor travelling along his own time stream? All will be revealed in a surprise-filled arc, and many old friends are back alongside some of the show’s best-loved foes.”

Doctor Who – The Fifth Doctor Adventures: Forty Volume 1 is available to pre-order as a collector’s edition CD at £19.99 or on download at £16.99, exclusively at www.bigfinish.com.

Plus, Doctor Who – The Fifth Doctor Adventures: Forty Volume 2 is due for release in September 2022 and is currently available to pre-order.