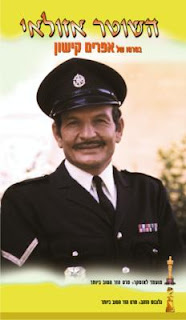 I first heard about The Policeman when I was doing some research on films coming up to their 50th Anniversary. The Policeman was nominated for Best Foreign Language film in 1972, having been released in Israel in 1970. I was planning to review all those films – a project that never happened – but it was impossible to find a copy in the UK. Indeed, I don’t know if it has ever had a release in the UK at all.

I mentioned it to my friend Aya, who is from Israel, and it turns out that The Policeman is something of an Israeli classic. So, I wanted to see it. There were ways of getting hold of it, but I thought as it was c.50th Anniversary it might be worth mentioning it to the Jewish Film Festival, which I did. And lo, I have just watched it as part of the 2021 Jewish Film Festival.

So, after all that preamble what did I think?

I really enjoyed it. It is the story of Avraham Azoulay (Shaike Ophir*), who is a policeman in Jaffa. He’s been a policeman for 20 years but is still just a poor beat copper. He’s useless in some regards and his contract is up for renewal. It’s obvious most of his colleagues think he’s a bad policeman. Not corrupt, just not hard enough.

He’s also married to the chain-smoking Betty (Zaharira Harifai), who smokes a lot. They’re marriage seems stable, but boring. They haven’t been able to have children (and there’s a very funny moment when Azoulay daydreams about having a huge family that also manages to get a fine dig at the obsession some men have for male children.)

There are moments in the film where we see Azoulay dreaming or daydreaming, including one of the best film within a film sequence I’ve seen. Ophir’s performance is so good. I’m told he was something of an Israeli acting/comedy legend. Based on this I can see why. He manages to perfectly balance the comedy and the serious moments. For Ophir’s performance alone this would be a film worth watching, but the whole story is well told. 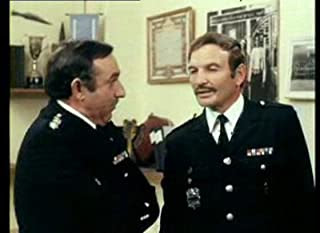 It was directed and written by Ephraim Kishon, who was an Israeli satirist. This is a satirical film, but it also has a heart.

Some of the comedy is pretty broad. There’s a gaggle of visiting French policemen who are utterly hilarious cliches of Frenchmen. Some of it is gentle. I could list scenes that made me laugh out loud but that would spoil your fun when – if? – you eventually get to see it.

There’s a subplot involving some criminals and another involving Mimi (Nitza Saul**), a young prostitute. Mimi isn’t a victim, nor – despite Azoulay’s attraction to her – does she become a love interest.

I’m having one of those problematic moments when I’m trying to review something that I really enjoyed without spoiling it. There are some genuinely emotional moments that are perfectly underplayed, and the ending is lovely. Ophir’s pitch perfect as the film ends.

And if you’re a British company that releases old films on DVD. I’m thinking of Arrow or the equivalent then I think this is a film worthy of a proper DVD release. As I’ve said I’ve been told it is a classic of Israeli cinema and it is a damn fine film with a central performance that any actor would be proud of.

*In terms of the spelling of actor’s names into English I have gone with the Wikipedia spelling. I’m told, for example, that transliterating Shaike Ophir’s name you could spell it Offir. But the sound is pretty much the same.

** For Doctor Who fans amongst you, Nitza Saul plays Karina in Warrior of the Deep about 24 years after this film was made. This mildly blew my mind when I discovered it.

The UK Jewish Film Festival 2021 takes place from Thursday 4th November – Thursday 18th November 2021, in cinemas and online. Find out more and how to watch The Policeman here.