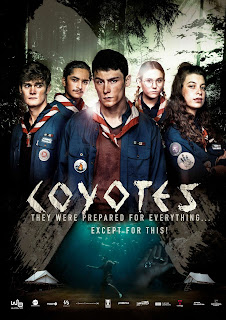 Mixing all the elements of a successful TV series - a team of teenagers, adventures, suspense and action - hit Belgian show The Coyotes comes to Netflix next month. Watch the trailer ...

Summer’s looking good for the Coyote Squad, the mixed-gender scout patrol that gathers annually in the small Belgian village of Warnaffe. Then one of them discovers a corpse – and a bag of diamonds beside it.
The thrill of becoming rich beyond their wildest dreams is quickly replaced by doubt, then real fear for their lives: the diamonds’ rightful owners are on their trail and will stop at nothing to get their treasure back. The group’s fight for survival leads them to question loyalty and love, friendship and personal morality, and to the ultimate realization that the only way they will make it out alive is if they stick together.

As the two directors Gary Seghers and Jacques Molitor explain, “Five teenagers, each caught up in a battle. Against themselves, against the world. As it should be at that age. For sure, the road to adulthood is rarely a walk in the park, but this will turn into quite the roller coaster. This is going to be the “summer they will never forget”. Neither the scouts nor the spectators.”

This series was produced by Panache Productions and the Compagnie Cinématographique, in co-production with Les Films Fauves, RTBF, Proximus, with the help of the Fonds Séries RTBF-FWB, Wallimage, Screen.brussels, the Film Fund Luxembourg and the Tax Shelter of the Belgian Federal Government (Movie Tax Invest and BNP FILMFINANCE).
Watch Coyotes on Netflix from December, 2nd. .
Image - Netflix
Email ThisBlogThis!Share to TwitterShare to Facebook