Film - The Battle at Lake Changjin 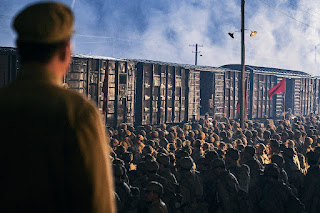 "The biggest worldwide box office hit of 2021" comes to cinemas in the UK from today, thanks to Trinity CineAsia. Find out more about The Battle at Lake Changjin ...


1950, the People's Volunteer Army (PVA) entered North Korea for a decisive battle in history. Under extreme freezing conditions, the troops on the Eastern Front, with fearless spirit and iron will, fought the US army until the last man standing at Lake Changjin.

With more than $878 million in ticket sales to date, far ahead of the latest 007 feature, No Time To Die’, The Battle at Lake Changjin is now the second-biggest Chinese grossing film, only behind Wolf Warrior II (also released by Trinity CineAsia). The UK will mark the first international territory release of the film outside of Asia, showing in over 25 cities [find your nearest screening here - Ed].

Billed as the most expensive Chinese film ever made, with a reported $200m budget, 'The Battle at Lake Changjin' stars 'Wolf Warrior [I & II]' and ‘Better Days’ leading men Wu Jing and Jackson Yee, respectively, and is co-directed by three leading, acclaimed directors CHEN Kaige (Farewell My Concubine), TSUI Hark (Once Upon a Time in China) and Dante LAM (Operation Red Sea).

Trinity Cine Asia co-founder and director Cedric Behrel said “The Battle at Lake Changjin falls into the war film template of decisive battles that change the course of history, the consequences of which are still felt today. It has hit a particular nerve with Chinese audiences, maybe because most popular war films are made from a Hollywood/American perspective, like the Vietnam war, it presents a fresh viewpoint. It reframes the war film narrative we’re used to seeing, but with production values to match Hollywood. It’s also a dazzling, no-holds-barred spectacle by no less than three landmark directors, where you can really see the $200m budget spent on screen and features strong physical performances from a red-hot cast (Jackson Yee and Wu Jing foremost). It’s having an incredibly long run in mainland cinemas, where it’s still playing and currently only second to Wolf Warrior II at the box office (still the highest-grossing film there) and, who knows, might surpass it by Christmas, if not Thanksgiving –in which case the irony of it won’t be lost on audiences, I’m sure. 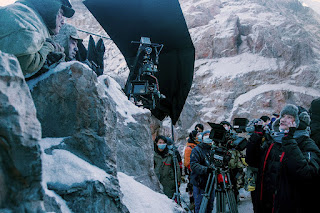 "The timing is very different from Wolf Warrior II, which we released at the height of summer. The snow-filled scenes and freezing temperatures in the film are better suited to this season, even though we’re entering the vortex of award-corridor releases, Covid 19 is on the rise again and could thwart things at any point (like in CIS, where the recent lockdown has forced us to postpone the release of Cloudy Mountain)… So it’s not a little ask theatrically, especially considering the near three-hour running time, but cinemas have been very supportive and previews are looking very good. The film is a total big-screen experience, and just like Dune or No Time To Die, it must be seen first and foremost on the cinema screen. That’s not to say it won’t have a good life on on-demand platforms and home, where it’s bound to attract a mix of viewers with a specific interest in war film, big action pieces or the director(s) work, which makes it broader than Wolf Warrior II. Longer-term, I see it triggering a new space for discussion and debate on a moment in history still impacting current geopolitics. It’s a privilege for us to be able to release the biggest box office story of 2021, when cinemas are just seeing the first real shoots of recovery. We are very grateful to Distribution Workshop for entrusting us with this unique offering".

Jeffrey Chan, Distribution Workshop CEO, added "Unbeknown to many of us these days, the battle at Lake Changjin marked a historical moment still relevant to contemporary Asia and possibly the world today. We're excited by the Trinity team's enthusiasm and effort in bringing this important film to the cinemas in UK within such a short turnaround time frame."
Photo credit: Trinity CineAsia/ Distribution Workshop
Find your nearest screening here
Email ThisBlogThis!Share to TwitterShare to Facebook