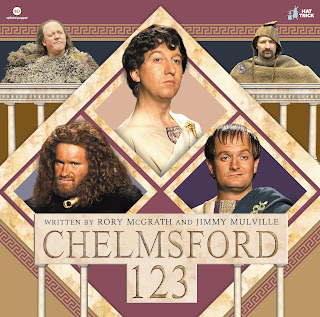 It's the talking of Chelmsford 123, as Hat Trick Productions and Spiteful Puppet present the revamped version of this forgotten comedy gem, in an all new full cast audio production...

The very first commission for the now legendary Hat Trick Productions company, from Channel 4, this historically hilarious sitcom ran for two series and featured the constantly warring Romans and the constantly cheesed off Britons, as a new Roman Governor is sent over to Chelmsford to replace the recently assassinated one. It could very well be seen as an satire on the times it was made, and it was the forerunner to Horrible Histories and the distant cousin of Blackadder.
Rory McGrath has adapted four of the original episodes (from Series 1 and Series 2), adding new material, in a full-cast production that features four of the original television cast returning to voice their roles - Jimmy Mulville (Aulus Paulinus), Rory McGrath (Badvoc), Neil Pearson (Mungo), and Philip Pope (Grasientus, and who also takes on the late Howard Lee Lewis role of Blag too, as well as composing the music).
But, there are a new set of voices too! 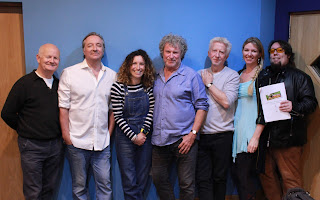 Paterson Joseph (recently seen as Commander Neil Newsome in the thrilling drama Vigil on BBC 1) plays Functio, who provides a foot in both camps as the Roman Governor’s second-in-command and the friend to the local tribal chief. He’s the only character trying to keep the peace!
Phil Nice (most recently seen as friendly neighbour Keith in Citizen Khan, but popping up in so many classic comedies over the years) cameos as the animal-loving but sadistic Emperor of Rome in Episode 1.
Barnaby Eaton-Jones (producer, director, and unofficial King of Comedy Revivals – with The Goodies, I’m Sorry I’ll Read That Again, Up Pompeii, and more, under his belt; as well as recently winning the Gold at the New York Festival Awards (the Oscars for Audio!) with his production of There Used To Be A Me, starring Alfred Molina as Peter Sellers) takes on the role of mad Welsh apothecary Wolfbane – originally played by the unavailable Geoffrey McGivern.
Rounding out the cast are Wink Taylor as Porcilongus, Hannah Boydell as Gargamadua, Kim Jones as Marcella, Ben Perkins as Quintus Pomepius Falco, and Darrell Maclaine as Marcus.
Here's what's coming up:
EPISODE 1: Arrivederci Roma
It's 123 AD and the people of Britain are about to receive a new governor from Rome - Aulus Paulinus. This is not the greatest news for the local Trinovantes tribe, so their leader - Badvoc - plots a 'welcome' party.
EPISODE 2: What's Your Poison?
Whilst Aulus plans a great banquet to improve relations with the local leaders, Grasientus plots to poison Badvoc. Each side hears word of the treachery and believes it aimed at them.
EPISODE 3: One For The Road
Aulus Paulinus intends to put his mark on Britain by constructing a grand Roman road direct between Londinium and Chelmsford - but there's a seemingly insignificant settlement in the way.
EPISODE 4: Heads You Lose
After a trip to inspect the fortifications against the border of Caledonia, Aulus has had enough of Badvoc's liberty-taking and has him imprisoned under sentence of death. Is this the end of the (Roman) road for Badvoc?
This production is now available digitally as individual episodes or as a complete set, exclusively via www.spitefulpuppet.com. There is also a limited edition 2-CD set, which features bonus material, a gag reel, and an interview with some of the cast. This is also available from Spiteful Puppet’s website. 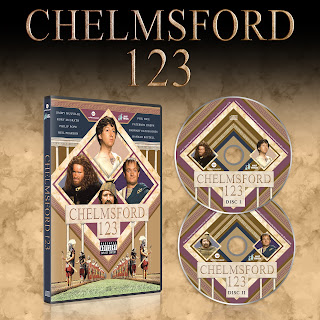