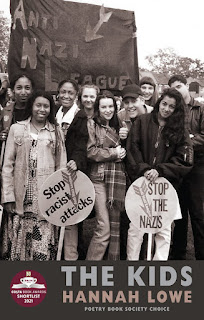 Tony Cross is reading all the books shortlisted for this year's T.S. Eliot Prize. Here are his thoughts on The Kids by Hannah Lowe...

I really enjoyed this collection from Hannah Lowe.

For example, two poems in the third section deal with her encounters with two of her former pupils grown-up. But within that over-arching theme Lowe talks about responsibility, about growing up; about loss and grief; about sex, love, and loneliness; about class and race and other things.

These are poems anchored in the real world. Their language is simple, but right. There's no pontificating. I found myself underlining several lines that I will try - and fail - to memorise.

I will absolutely try to memorise "The Size of Him" because of how Hannah Lowe uses Doctor Who watching as part of a poem about her son. Now, I’m not the sort of person who gives additional credit to writers that use Doctor Who in their work*, but I loved the way she managed to make the interaction around watching Doctor Who an insight into her son’s way of seeing the world. It’s rather charming.

The other thing I should praise Hannah Lowe for is writing that manages to be poetic and straightforward. I have read a lot of poetry over the last couple of days and poets seem to fall into two broad categories: the impressionistic almost abstract and the solid straightforward. Now, I hold no banner for either side. There is a time and a place for both. There are dangers with both. The former can drift into incomprehensibility and pretention, the latter in clunkiness and boredom.

Hannah Lowe manages to be straightforward and poetic. To go back to that Emily Dickenson quote that I might end up using as often I do the Anna Akhmatova one: “If I read a book and it makes my whole body so cold no fire can ever warm me, I know that is poetry.” And this is poetry.

So, yes. I enjoyed this a lot. It’ll definitely get a re-read.