Book - Something More Than Night 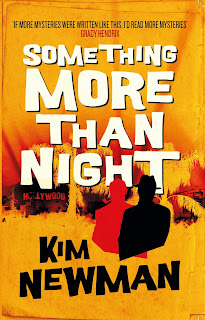 Steve Taylor-Bryant finds some friends in the darkness as he reads Something More Than Night by Kim Newman, out now from Titan Books ...

Kim Newman is famous for taking what we think we know and subverting it, whether it’s his hugely successful reimagining of Dracula or this latest book that turns noir detective fiction on its head, delivering both the fantastical and the actual as imaginable and leaving you wondering if any of the story is true.

Hollywood, the late 1930s. Raymond Chandler writes detective stories for pulp magazines, and drinks more than he should. Boris Karloff plays monsters in the movies. Together, they investigate mysterious matters in a town run by human and inhuman monsters.

John Devlin, an investigator for the DA’s office who scores high on insubordination, enlists the pair to work a case that threatens to expose Hollywood’s most horrific secrets. Together they will find out more than they should about the way this town works. And about each other. And, oh yes, monsters aren’t just for the movies.

As an interesting slice of detective fiction, Something More Than Night is excellent. Much like when Stephen King writes the odd noir novel, there is more of the supernatural than maybe you would find in a ‘normal’ story of this type and, whilst the monster elements of the narrative are fantastical and full of horror elements, they only work because the basic structure of the all-important detective strand is so well constructed. It is clever, it has all the beats that need to be hit to work, it has a complex storyline, it has extraordinary human moments, it has conflict and consequence, and it has chemistry between its protagonists. In fact the friendship throughout Something More Than Night between Raymond Chandler and Boris Karloff is so well described that I am glad that, as an afterword, it is actually explained to me that whilst both men share a similar geographical timeline there is actually no evidence that they ever met because that just enhances my opinion of Newman’s writing. Not only did he have me believing that monsters are real he had me emotionally invested in a friendship that it turns out wasn’t a real one.

I like authors who shake up a genre, who use very smart thinking to enhance often overused storytelling tropes, but most of all I appreciate writers that make me care about their fictional characters and events within their books and, for my money, there are few that can beat Kim Newman. Something More Than Night is a dark and strange tale of friendship, monsters, and the lengths that people will go to live forever. One of the best books I have read this year and a recommended read for anyone who wants a great detective story with some massive twists and turns along the journey.