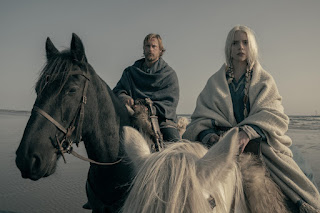 From the visionary mind of Robert Eggers, and coming to cinemas in April, watch the trailer for The Northman...

Set at the turn of the tenth century in Iceland, The Northman is an action-filled epic that follows a young Viking prince on his quest to avenge his father’s murder.

Directed by Robert Eggers, who co-wrote the screenplay with Sjón, the film boasts an all-star cast that includes Alexander Skarsgård as Amleth, Anya Taylor-Joy as Olga, Nicole Kidman as Queen Gudrun, Ethan Hawke as King Aurvandil, Claes Bang as Fjölnir, Björk as the Seeress, Hafþór Júlíus Björnsson as Thorfinnr and Willem Dafoe as Heimir the Fool.
Image & info - Focus Features
Email ThisBlogThis!Share to TwitterShare to Facebook