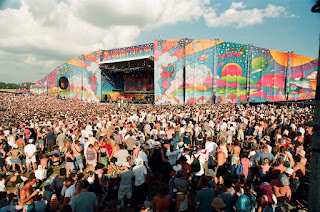 They say if you remember Woodstock you weren't there. Steve Taylor-Bryant wasn't at any of them but watched the documentary Woodstock 99: Peace, Love, and Rage...
I remember Woodstock 94, a rather glossy corporate funded well organised but still problematic festival. I wasn’t there but I saw something on TV later, maybe a concert film or something, and whilst I was into the music and the artists, Woodstock just didn’t hold a place in my heart like it did for the generations before me. Even watching a film about the original Woodstock in 1969 seems to be a rose-tinted flower power cover up of a drug fuelled party that didn’t go off without violence and racism. When it come to a Woodstock festival at the end of the century, you have to ask yourselves who really cares? And does the message of peace and love carry through the list of bands? The answer to these questions? Well, the people who make money charging $4 for a bottle of water at a concrete military facility in high 30’s Celsius weather care, the artists who, I presume, were being paid care, and the organisers try desperately to be relevant all these decades later care, and, no, a four day bill with the likes of Limp Bizkit, Kid Rock, and Korn doesn’t immediately strike me the message of peace. I’m not against these bands, seen most of them myself, but don’t throw all the heavy names on a bill and try and sell peace. And so, what happened when this disorganised money grab happened? Lord of the Flies. Sexual assault and rape. Death of festival goers. Fans of a band at a festival tearing the venue apart and starting a massive fire. 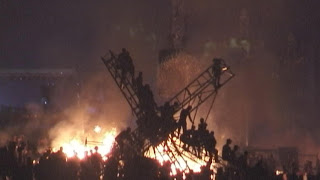 Whilst the film is a good watch, with great insights from the stars that attended, heartfelt interviews with those who were music fans attending the four days and having a tragic experience on both sides of the coin, and the festival organisers trying to blame MTV News and their narrative for what happened in Rome, New York, when they didn’t think about water, showers, ideal camping, toilets, alcohol sales and medical facilities for 200,000 partygoers, there is a little too much trying to cram in news stories and politics from that particular era as a reason for why a load of drunk and drug fuelled predominantly white young men rioted and touched women inappropriately. Is it really Bill Clinton being impeached’s fault that a bunch of twenty somethings can’t behave themselves? Not really. I also don’t see the relevance of Fight Club and The Matrix or that rolling the Columbine massacre into a review of a festival that was piss poor in its organisation does anyone any favours either. This wasn’t an era defining anything, this wasn’t a generation handover of anything, this was essentially an example of what happens when you trap horny white boys behind a fence and charge less for beer than you do for water. This is an example of what happens when you have inadequate security, no medical planning, and an excuse book instead of the ethics and morals you should have had from the first Woodstock and an inability to step in before it turns into a riot. 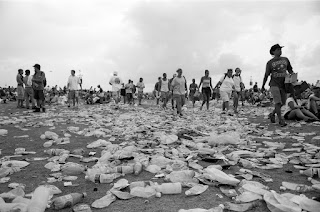 The attendees of Woodstock 99 that are on camera committing wanton acts of violence and destruction aren’t doing it because of any film, or the President of that day's sexual indiscretions, or even because Kid Rock is a complete knob, and I would love nothing more than to blame Kid Rock. They are doing it because they were allowed to get away with behaviour that isn’t allowed anywhere else, because festival organisers are so wrapped up in their own egos they can't see what is right in front of them, and because we didn’t (and probably still don’t) educate young men that this fraternity house rape culture and white privilege isn’t okay, despite the calm manner with which the riot police ended the festival being different to the way they handle a Black Lives Matter peaceful protest, or anything organised for and by women.

Woodstock 99: Peace, Love, and Rage isn’t quite the political and cultural phenomenon it may be set out to be, nor is the comedy film it could have quite easily turned into but it is a great example of what happens when you leave a large crowd of white men together with no rules and beer, set to a soundtrack of mediocre late 90’s rock music. As a white man myself who has seen many of these bands live and attended festivals myself, I don’t recognise me on the screen, but I am damned if I’m not going to call it what it is. Most of the rage from the title of the film will be unfortunately held by the viewer, especially when one of the organisers blames the women for their own assaults, but the film really does show people for what they are and shows every mistake made by everyone, so come the end you are in no doubt who is lying in their interviews and who isn’t.
Ending with how peaceful Coachella was, the month after Woodstock 99, shows that it is possible to have multiple bands on a hot weekend and have fans behave themselves. Woodstock 99 is the organisers and the revellers’ fault and Woodstock 99: Peace, Love, and Rage is Prosecution Exhibit A.
Follow Steve on Twitter @STBwrites