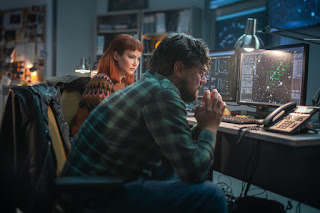 Looking for something to watch on Netflix? Barnaby Eaton-Jones looked up Don't Look Up...

Don’t Look Up isn’t Dr. Strangelove (or How I Stopped Worrying and Learned to Love the Bomb) [read Steve's review of that film here - Ed]. It couldn’t be. Not because it doesn’t match it, as I think it does, but the impact of Stanley Kubrick’s pitch-black satire centred on the public’s fear of the impending Nuclear Armageddon that that governments of the world were going to cause – it was made at the height of the Cold War, and at the height of Peter Sellers comic powers (as he portrayed three different characters within it). Times have changed immeasurably since then, with more threats to the world (though the governments remain the same hollow rule-makers), but the target these days is both a broader and a scarier one.

Don’t Look Up does allow itself to follow the same template and hits the same tone, though.

It’s essentially Dr. Strangelove rebooted for a social media generation, and it really ramps up the exasperation, powerlessness, ego, and fragility of the human race. You become immersed because you can see that, if this were to happen, this may very well be how the narrative plays out.

Adam McKay, who writes, directs, and co-produces, hammers home the brutal realism of what might happen if a ‘planet-killer’ asteroid headed directly to earth; but there’s a brilliant lightness of touch to his direction and scene-shifting.

At the centre of his story are two relatable characters – an anxiety-ridden, dyed-in-the-wool astronomer and a PhD student with all the caustic personality and sass needed to shake him up a little as the story goes on. These downtrodden roles are inhabited by Leonardo DiCaprio and Jennifer Lawrence (and I do mean ‘inhabited’). Dr. Randall Mindy and Kate Dibiasky go on a journey of discovery as they are plucked from their college’s observatory to the corridors of power (and oval office) in the White House, helped along by a believably stoic performance by the Head of NASA’s Planetary Defense Coordination Office, Dr. Teddy Oglethorpe (Rob Morgan, bringing a quiet dignity to the role). Meryl Streep’s President inhabits the White House (more concerned with approval ratings, mid-term elections, and ignoring sex scandals) and she is clearly a cipher for Donald Trump and his administration. The Chief of Staff, played by Jonah Hill, is a screaming delight as an obsessive, narcissistic, man-child, who gets the perfect end credits sequence. His needy greediness seeps out of every pore and the way he leads the ‘Don’t Look Up!’ movement to try and get the populace to avoid seeing the impending comet as the final days count down is indicative of Trump’s policies to discredit science and common sense.

It’s a long film, clocking in at over two hours, but the impending dread it builds – with knee-jerk belly laughs all the way through – is incredible. There’s a few story beats which seem shoehorned in, like the affair with a typical American daily show presenter - exquisitely essayed by the ever-brilliant Cate Blanchett - and the final strand where Mark Rylance’s other-worldly Elon Musk/Jeff Bezos-esque character of Sir Peter Isherwell (a tech billionaire and CEO of BASH – the company who plan to ‘mine’ the asteroid for precious metals instead of stopping it in its tracks) becomes the cowardly saviour of the human race, are both a little skewed from the realism of the rest of the narrative but these can be forgiven because the pay-offs to these characters are worth the leap of faith.

If you like your apocalypse to come with a heavy sauce of satire squirted over it, and a side order of laugh out loud moments, then Don’t Look Now does achieve that in spades. There are myriad moments of stand-out silliness, but all played totally straight, and it does leave you feeling existentially affected and even singed by the comedic burn on the recognisable society we live in.

It’s always been somewhat of a messed-up world and, at times when reality is becoming too scary or too detached, these are the sort of black humour monuments in movie form that not only entertain but inform (and document society too).