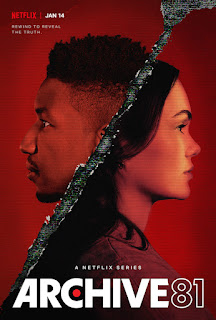 Coming to Netflix on Friday, watch the trailer for supernatural thriller series Archive 81...

Archive 81 follows archivist Dan Turner (Mamoudou Athie), who takes a job restoring a collection of
damaged videotapes from 1994. Reconstructing the work of a documentary filmmaker named Melody Pendras (Dina Shihabi), he is drawn into her investigation of a dangerous cult at the Visser apartment building. As the season unfolds across these two timelines, Dan slowly finds himself obsessed with uncovering what happened to Melody. When the two characters form a mysterious connection, Dan becomes convinced he can save her from the terrifying end she met 25 years ago.

In addition to the original Archive 81 found footage horror podcast - which loosely inspired the series - the show draws from seminal horror and paranoia thrillers such as THE SHINING, SUSPIRIA and ROSEMARY’S BABY. There are specifically ROSEMARY’S BABY and SOLARIS easter eggs seen throughout the show. Cult classic TV shows including the X-FILES, TWIN PEAKS, and FRINGE also served as inspirations.

Rebecca Sonnenshine said “With Archive 81, we’re hoping to give the supernatural horror genre a new twist - while keeping a dark, deeply emotional romance as its core. Alongside the talented Mamoudou Athie and Dina Shihabi, and visionary partners Atomic Monster and Rebecca Thomas, I'm excited to take Netflix viewers on a terrifying and visually thrilling adventure.”

Sonnenshine further describes the series as a “mystery box show,” one that bends the many genres of thriller, horror, suspense and supernatural, with an unconventional love story at its centre. The show is also a new take on the found footage genre, combining footage from the tapes Dan is restoring, plus a collection of junk media floating around in basements and on the internet.

Talking of junk media, another nice little Easter Egg for the series is that every episode will start with a piece of junk media as a teaser, revealing a secret about that episode. [Neat. - Ed]
Watch Archive 81 on Netflix from 14th January
Image - Netflix
Email ThisBlogThis!Share to TwitterShare to Facebook