TV - Fraggle Rock: Back to the Rock 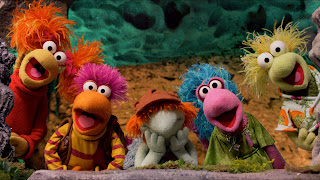 It's time to dance your cares away again as the Fraggles return to Apple TV+ in an all new series on 21st January. Watch the trailer...

In addition to Fraggle Rock: Back to the Rock, Apple TV+ is also the streaming destination for the original Fraggle Rock series, as well as recently added bonus specials, Down at Fraggle Rock, Doozer Music and Fraggle Songs, all of which are now streaming.

The only thing that concerns us slightly is whether the new series will keep the iconic theme song from the original. It's not looking likely if the trailer is anything to go by!
Image - Red, Gobo, Boober, Mokey and Wembley Apple TV+
Email ThisBlogThis!Share to TwitterShare to Facebook