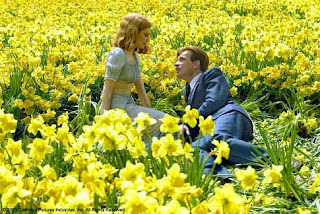 Susan Omand watches Big Fish and discovers so much more than just a film...


This was just going to be a straight review of one of my favourite films of Tim Burton, Big Fish. I was going to relate the plot of the story, that William Bloom (Billy Crudup) spends time thinking over the stories, all the lies in his eyes, that his now dying father Edward filled his head with as a child. I was then going to go through the casting and say how wonderfully Albert Finney, Ewan McGregor and Perry Walston portrayed Edward throughout his life, how badly underused Jessica Lange was and how badly overused Helena Bonham-Carter was. I was going to end up with a reminder of the sublime settings and the hints of just plain weird that meant it could only be made by Burton. I was going to do all that, but now I’m not. Because I came to a realisation.

Big Fish is a film about a man who became his stories and the stories that made the man. The edges between fantasy and reality blurred as events were exaggerated or people made that little bit more interesting and unusual all in order to tell a good tale. It is this amalgamation of the two that, for me, sets this film apart from the others that Burton has done and also makes me think of Big Fish as more autobiographical than he maybe meant it to be. I don’t mean in the literal sense – Burton is not Edward Bloom, lying dying in bed while his son tries to extract the truth from behind all the tales of the ring-swallowing big fish, the circuses, giants and the town in the middle of nowhere. No, I mean in the sense that Tim Burton, the myth, the storyteller, has become so much more than the man himself. When you sit down to watch a Tim Burton film you know what you want to get... that not always obvious gothic air, the unsettling feeling of being slightly out of place and time (which always brings to mind a scent of lavender and mothballs), of being an observer rather than a participant and the fact that often parts of his films make so little sense that as a whole it just really makes complete sense and is perfect art. If you don’t get that, as was the case with his previous film, Planet of the Apes, which for me became too commercial and too much “what the studio wanted” because it was their dollar, then you feel disappointed, if not more than a bit cheated out of your Tim Burton film.

And that is the point.

When you dig for the truth behind the myth, much like Dorothy meeting the Wizard behind the curtain in the Emerald City of OZ, or Will finding out truths about his father in Big Fish, you will often have your curiosity satisfied but end up slightly disappointed because the mystic sheen has been taken off. That is what Burton is. He is just a man, albeit with a unique artistic vision, with an ability to weave a tale so believable that, even though you know it can’t be true, you end up not knowing what is real and what is fake and you start to wonder how much of his own public persona is true. And, as with his films, the whole is so much greater than the sum of its parts, so don’t try to dissect his storytelling ability, don’t try to understand the man for there is nothing to understand. Just accept and enjoy Burton for who he is and what he creates. He’s just “Tim Burton”.