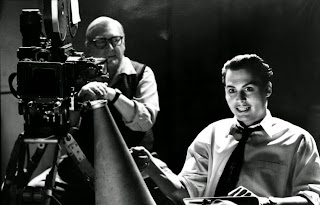 
Ed Wood came out in 1994 at an unusual time for such a project. Since the success of Beetlejuice and Batman, Burton had teamed up with Johnny Depp to produce the critically acclaimed Edward Scissorhands and again with Michael Keaton for a second Batman venture, Batman Returns.

Hollywood was there for the taking, any project Burton could have wanted he would have been given, the rumours of a Burton Superman had already begun circling, but Timothy Walter Burton is his own man and decided a biopic of a old horror and science fiction filmmaker made in black and white was the right way to go.

Whether it was or not is an argument for another time but Burton is still working and the huge stars queue up to appear in his madness so I'll go on record as saying it was definitely the correct choice and possibly Burton’s most important film.

I don't use the word important lightly, Burton had a feeding frenzy of Hollywood’s elite at his door and, whilst the cinema going public knew Burton to be maybe a little strange, no one quite knew why. Ed Wood goes some way to explaining why Tim Burton became the filmmaker he is and why Hollywood may have been cautious in not repeating an old mistake.

The writing team of Scott Alexander and Larry Karaszewski had been trying for a while to get something non-family made and had approached Burton about the biopic with him agreeing to produce for Columbia Pictures. The original director of choice, Michael Lehmann, had a scheduling conflict due to his commitment to Airheads and at the last moment Burton had to additionally step in to the director’s spot. He immediately set about Burtonising (it's a word!) the concept and, finding that Columbia didn’t back his vision, dropping the film. Not to be thwarted though, Burton took the project to Disney who agreed to a budget of around $20million and to Burton's insistence on black and white filming and decided to launch through their Touchstone brand.

The journey from paper to screen in reality was as much Ed Wood as the projects that the 50's director himself launched. Wood was forever breaking budgets, filming in a way that studios weren’t used to, moving from one studio to another and often stepping in as director when the original choice didn’t work for whatever reason, normally creative differences. The film itself that Burton brought to life was filmed just like Wood would have done and had an instant 'cult' feel to it, enhanced by the zany performance of the transvestite loving filmmaker by Johnny Depp, who was flawless in his execution. Add to the melting pot Martin Landau as the famous but depressed drug addict star Bela Lugosi, making a return to fame and developing a friendship with Wood that was unbreakable, and you have a quirky film to view, but more importantly a perfect insight into the creative process of both the subject, Wood, and the creator, Burton.

You may or may not like Ed Wood as a film, and I appreciate it is not for all palettes, but maybe check out some the 'B' movie classics of Wood himself. Titles like Plan 9 From Outer Space, Glen or Glenda, and Bride of the Monster are well worth some eyeball time. Glen or Glenda was an insight into the transvestite and cross dressing world that Wood found himself drawn towards and both Plan 9 and Bride give great examples of the horror and science fiction that Wood created and show some rough and simplistic traits that would appear in Tim Burton films some thirty years later, almost certainly as a direct influence of Wood’s work.